Institute for Mineral and Energy Resources

Posted on December 7, 2016 by Louise Beazley 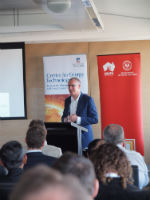 The event followed the severe storm event in South Australia on 28 September, during which transmission and distribution electricity assets were damaged and led to a statewide blackout. It preceded the Council of Australian Governments (COAG) on 9 December, at which Chief Scientist and AO Dr Alan Finkel presented his preliminary report to the Independent Review into the Future Security of the National Electricity Market.

The forum highlighted that a greater understanding of renewable energy technology in South Australia is needed. Which technologies should we focus on and invest in? How do we ensure they will meet our needs? Seventy people, including industry, researchers and policy-makers were in attendance.

At the cocktail function that evening, Minister for Mineral Resources and Energy Tom Koutsantonis confirmed that the South Australian renewable energy sector was not to blame for the statewide power outage in September. The Australian Energy Market Operator explains the causes of the outage on their website.

Institute for Mineral and Energy Resources

The University of Adelaide
SA 5005
Australia