Monday – back to work. We had a great weekend, most of which we spent together, adventuring around Shanghai. We were completely exhausted by Sunday night after seeing a lot of the French Concession and stumbling upon a little camera and photography museum (truly a hidden treasure). Today, being the beginning of the week, it wasn’t hard to get out of bed and get stuck into the day. We all had bits and pieces that we knew we needed to do at work and we also had hopes for some new and interesting jobs our partners had lined up for us this week. Last week I had helped my team by creating a PowerPoint presentation that they would use to bid for a job with an American client. The job itself was with a relatively high-profile company which was looking to enter the Chinese market by buying a number of assets. I found out this morning that – partly due to the presentation I’d made – my team had won the bid for the job. After a brief discussion with my team about last week’s success, we began work for the day.

I was asked to read over a contract relating to the sale of a private aircraft and correct any spelling and grammatical errors and also help with formatting. After finishing that, I made a flow chart illustrating the payments made by the purchaser and the timeline according to which the sale was to take place. I found a free tool online which proved to be very useful, and I had the flow chart wrapped up by the early afternoon. By 3:30, the work for the day was winding down and so my team and I decided to drink some bubble tea in our partner’s office overlooking the Bund. We talked about the cultural differences between our two nations and the contrasts in what was expected of us as adolescents growing up and as young adults. My team – all of whom are around my age – had some fascinating perspectives on relationships, marriage and dating culture. We also discussed the career prospects and progression of young lawyers in Shanghai, a future which seemed both challenging and bright. After our tea, we spoke for a little while longer on my plans to travel China further, and my team offered suggestions on where to visit and how to best build on my rudimentary Chinese language skills.

My day finished at 5:30pm and afterwards, the other interns and I met up out the front of Shanghai Tower to search for some dinner on one of the close (and cheap) restaurant streets. We settled on a restaurant we had enjoyed a week earlier and ordered quite a few dishes, all of which we would share on a large glass ‘lazy-susan’. We ordered around 10 dishes shared between 8 people and a few beers, all of which cost us about 350 yuan or $70AUD – less than $10 each. After a long dinner, we made our way to the metro where some of the others split off home while a few of us went on to play dodgeball at a local bar. For 50 yuan (around $10 AUD), we played dodge ball for a few hours and left with a bit of soreness and some new friends who we plan on seeing there next week. 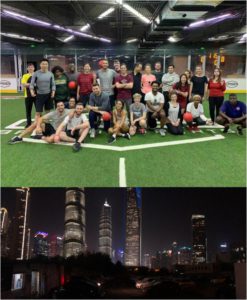 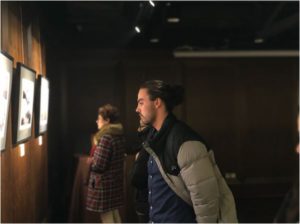 This entry was posted in Student and tagged China Interns 2018. Bookmark the permalink.