Posted on November 22, 2016 by Kirsty Mastrangelo

The University of Hawaii had a lab explosion in 16th March this year that resulted in a postdoctoral researcher losing one of her arms. It is a timely reminder of the risks that researchers can face and the importance of hazard management processes.

The incident at the University of Hawaii involved a compressed gas mixture (55% hydrogen, 38% oxygen, and 7% carbon dioxide) that ignited as a result of a static electricity discharge, which most likely occurred when the researcher touched the digital pressure gauge.  The University was charged with 15 safety violations including: failing to provide adequate instruction and supervision of workers, failing to provide adequate emergency management equipment and processes, and failing to reduce exposure to potential hazards.

Could the same thing happen here?

There are several aspects of this incident that are worth considering:

In Australia under WHS legislation these failures to manage the hazards, to report and to take reports seriously would be likely to result in the prosecution of the University.  It is also possible that the academic responsible for the laboratory, their Head of School and/or the Executive Dean could be personally prosecuted.

Managers and supervisors are reminded to carefully consider the hazards that they may have in their areas, and how they manage the risks associated with them. 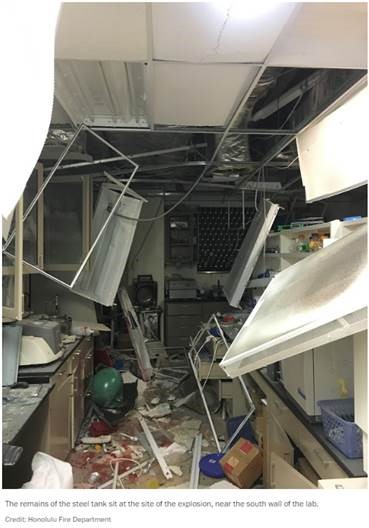