Now that the world has agreed that action must be taken to respond to climate change the question becomes how to harness investment to achieve a profitable transition to a low carbon future.

In partnership with the EU Centre for Global Affairs the Adelaide Sustainability Association hosted a seminar with the Adelaide Lord Mayor as part of the European Union Green Week 2016 – the only student led event in Australia. Green Week is the largest annual gathering of European environment policy makers and forms the cornerstone of substantial change in this field, with 2016 theme being ‘Investing in a greener future’.

The event began with an introduction from ASA President Daniel Conley. Daniel opened the event by providing the audience with a summary of ASA goals and aspirations and acknowledged the ASA committee members. Shortly after, Lord Mayor Martin Haese gave a speech to the 115 people in the room. The Lord Mayor focused on a broad range of topics, challenges and opportunities that Adelaide has in contributing to a global future, and what students can do to help shift the global trend toward sustainability. The Mayor presented insights into what his journey has been like, representing Adelaide on the world stage at various events at conferences around the world, including the landmark COP 21 in Paris. Sustainable Development Fellow, and international best-selling author, Dr Karlson Hargroves from the Entrepreneurship, Commercialisation and Innovation Centre (ECIC) of the University of Adelaide, then joined Martin Haese on the stage for an informal interview. Dr Hargroves asked Martin a series of questions, focusing on his role as a Lord Mayor of Adelaide, his journey to getting there and his plan for the future. Following this participants networked over light refreshments.

The event gave the audience an insight into the plans of Adelaide for the future and how students, academics and professionals can better understand how the city of Adelaide will benefit from investments in a greener future, and harness global thinking to drive local innovation. The event was a significant milestone for the ASA and its members and paved the path for similar events like this in the future. 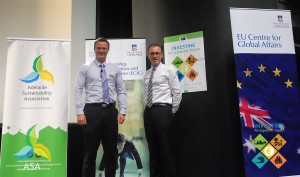 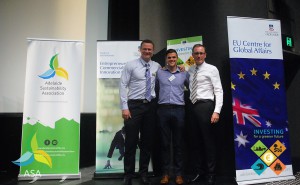 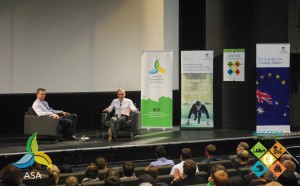 In the EU, Green Week is the largest annual gathering of European environment policy makers and forms the cornerstone of substantial change in this field, with the 2016 theme being ‘Investing in a greener future’. To celebrate Green Week in Adelaide, the EU Centre for Global Affairs collaborated with the student-led Adelaide Sustainability Association (ASA) in […]

The Adelaide Sustainability Association with support from event partner the EU Centre for Global Affairs at the University of Adelaide present: Think Global Act Local: Investing in Adelaide’s Green Future. A Conversation with The City of Adelaide’s Lord Mayor, Martin Haese This event is held in partnership with the EU Centre for Global Affairs to complement the European Union’s […]