Rivers of Reform: Lessons from the Colorado and Murray-Darling

Adam Webster is a PhD student at the Adelaide Law School and a 2012 Fulbright South Australia Scholar.

In late September I attended a workshop at the Crawford School of Public Policy at the Australian National University to discuss some of the recent reforms in relation to water resource management within the Murray-Darling and Colorado River Basins. The workshop was attended by lawyers, economists, ecologists, public servants and academics who have an interest in these two river basins.

At the ANU Workshop I was part of a panel discussion entitled ‘Nature and causes of water stress: adaptation in the face of unprecedented stress’. Each participant made some opening remarks, posing questions that were then discussed by the group at large. Reproduced below is an edited version of my brief opening remarks.

In my opening remarks I want to focus on the role that the legal systems have played in these two basins – the Colorado and the Murray-Darling – in dealing with ‘water stresses’ such as drought or over-allocation of water. I will focus primarily on the Murray-Darling, but the United States provides from some interesting comparisons. The first question that I want to pose to the group is: Do the respective legal systems add to (rather than help resolve) stresses placed on the basins? (By legal systems I mean not just the law itself, but the political structure that the law – particularly the Constitution – establishes).

In Australia, the Commonwealth does not have express legislative power to regulate the Murray-Darling Basin. Interestingly, giving the Commonwealth such power was mooted during the drafting of the Australian Constitution, but the idea was rejected. The reluctance to give the Commonwealth control came largely from New South Wales. NSW had spent a large amount of money on irrigation and water conservation and did not want to give all this up to the Commonwealth. The Convention Debates show that the drafters of the Constitution knew that this was an important and difficult issue, but they could not agree on how to resolve it. In the end, it was thought that the High Court or the Interstate Commission would be able to solve any conflicts between the states with regard to the waters of the Murray-Darling. Much of the debate focused on how to share water between the states rather than thinking in terms of what might be in the best interest of the Basin as a whole.

The structure of the legal system adds to the challenge of dealing with an event such as a drought by creating a great deal of tension between states. It seems that since well before federation South Australia has been preoccupied with the question of whether the upstream states are taking more than a ‘fair share’ of the water from the Basin. The nature of the Australian federal structure means that a high level of cooperation is required to bring about a Basin-wide solution. That may not necessarily be a bad thing, but it has often resulted in intergovernmental agreements being made in times of crisis and high stress. This raises my second question: Looking forward, do those circumstances bring about the best agreements? Do they bring about good long-term solutions or do they focus too much on the immediate crisis and stress?

The South Australian response to stress or crisis is to threaten litigation. Litigation has been used as a tool to leverage an agreement from the other states. In contrast, in the United States, states have not just threatened litigation, but have actually commenced legal proceedings in an attempt to secure more water for the state. If an Australian state finally decides to litigate in an attempt to get more water for the state, what does a ‘win’ look like? More water for SA? More water for the environment? Is litigation just shifting the decision-making responsibility from other arms of government to the courts? Are the courts better placed to resolve these matters?

If a state does decide to litigate there are a number of important things that the government of that state should keep in mind. Litigation is not necessarily quicker or cheaper. Interstate water disputes in the United States have taken years (or even decades) to resolve. Interestingly, the United States Supreme Court has noted that resolving these disputes by intergovernmental agreement is preferable to a court getting involved. South Australians should perhaps take note of this point.

Another important point for states in Australia to think about is what the litigation might achieve. Let’s assume that a state withdraws the referral of power upon which the Commonwealth Water Act 2007 is partly based and mounts a constitutional challenge to an aspect of that Act. If that part of the Act is found to be outside the legislative power of the Commonwealth in the absence of the referral of power, where does that leave the state? Does it solve the problem? Does the state who mounted the legal challenge end up with more water as a result? Or does it just mean you need to start the negotiation process all over again? 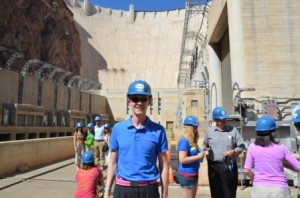 Adam at Hoover Dam during his stay in the United States.