Last Friday was the offical launch of the Public Law and Policy Research Unit. Below are the opening remarks from the Unit’s director, Associate Professor Alexander Reilly.

For decades the Adelaide Law School has been the home of prominent public law scholars – James Crawford and Hilary Charlesworth in public international law, John Finnis and Ngaire Naffine in legal theory. And currently Rosemary Owens in Constitutional Law and Industrial law (and now the inaugural Dame Roma Mitchell Chair of Law.), and Andrew Stewart in Industrial Law. These researchers, past and present, are names in themselves.

But in the past 20 years there has been a discernible shift in Universities from individual to collaborative research. And so we have the proliferation of Research Centres, Institutes, Academies and Units.

There are no doubt many explanations, but one can’t avoid the obvious connection to the change in the profile of Universities, and the increased emphasis on securing external funding for research, in particular.

To be funded, projects need a greater scale and tangible institutional support. Projects also need to be targeted to achieving outcomes that fit broadly within the priorities of the funding body. Channelling applications through Research Centres assists greatly with meeting these requirements.

There are positives and negatives in this turn in University Research.

On the bright side, it requires a greater discipline in establishing research projects. An ability to describe the aims and significance of projects, to articulate a developed methodology, and to establish and stick to time lines.

Another positive is that the search for external funding has encouraged broader vision and ambition: how can an idea be spun up into a project extending over three years, involving multiple parties, and tangible outcomes?

There is also greater accountability: panels of assessors check the quality of research proposals, and provide ruthless feedback; outcomes of research are not just measured in papers, but also on how the research has altered the policy debate and influenced governments.

And there has been an increase in productive collaboration: academics have been forced out of their offices to talk to other academics with similar or competing ideas, and to find non-academics in industry, government, the profession and the broader community with a range of complementary and contrary perspectives. The combination of expertise from these different sources can create fuller and more convincing projects. I do not mean to suggest that this kind of collaboration did not happen before, but now it is imperative.
I might note here that there is also a recent shift in focus on who funds our research. For a long time, grants from the ARC have been the ultimate goal. But as government funds have become increasingly hard to secure, Research Units will need to widen their focus.

There are also negatives in the focus on attracting external funding.

Research risks being less independent: for success it has to be tailored to meet the strategic priorities of governments or other funding bodies. An important role of the University is to sit outside the political and policy cycle, and explore issues that have limited or no national significance or immediate application. In John Henry Newman’s ideal of the University – he advocated for the exploration of knowledge for its own end – though for Newman, this was a religious, not a secular pursuit.

The more directed nature of research means it is likely to be less speculative as it needs to be measured in terms of its tangible results. Ideas have to be readily understood, able to be reduced to a one line description, so as to be marketable. And yet highly speculative research is where paradigms get shifted.

The growth of research centres is also a product of the proliferation of research outputs more generally. There are more universities, more academics, more journals and more papers. It is harder for individuals to cut through, although the very best still access the best journals in the existing hierarchies. One response is to make the voice louder, and hopefully deeper and broader, from within a research collective. Another is to make it more prolific.

So we have the Public Law and Policy Research Unit (PLPRU). What’s in this name? Well, to start, we can all agree that ‘PLPRU’ is no rose. The name is functional, and not sweet. We are a ‘unit’ because in University lexicon you start as a ‘unit’ and graduate to a ‘centre’ with size and success. We could perhaps have left ‘research’ out of the title. We’re academics. What else are we going to do? But since we’ve got it in there, what does it mean that we ‘research’, or conduct research.

Research encompasses a range of activities:
–    producing new data;
–    gathering together existing data;
–    analysing data – new or existing.
‘Research’ also occurs without ‘data’, and relies solely on ideas, focussing on developing and applying conceptual frameworks, and ways of thinking. In public policy research we span this spectrum of research modes – with the law itself being an important source of data for us.

But the mode of research does not get to the core of our business. Research may be the most important thing we do in our lives. It seems to me that the fast moving, secular, capitalist world has little time for reflection on what it means to be human, living in a world of remarkable diversity and complexity, but of finite resources. The reflection required here has been outsource to us, among others. And out research is that reflection. In this sense, research is of profound moral significance.

One of the great conceits of University research is that it is objective. This is its strength, and that is why University academics are asked to write ‘Fact Checks’ or expert opinion pieces. But of course, there is no such thing as objectivity. This is captured nicely in this statement of the Association of Qualitative Research in the UK:

In its purest sense, the idea of objectivity assumes that a truth or independent reality exists outside of any investigation or observation. The researcher’s task in this model is to uncover this reality without contaminating it in any way. This notion – that a researcher can observe or uncover phenomena without affecting them – is increasingly rejected, especially in the social sciences but also in the natural sciences. In qualitative research, a realistic aim is for the researcher to remain impartial; that is, to be impartial to the outcome of the research, to acknowledge their own preconceptions and to operate in as unbiased and value-free a way as possible.

Here in lies a dilemma for the public law researcher. In the face of the inevitability of political choice, how does one present oneself in the marketplace of ideas? There is great power and cache in the illusion of objectivity.

Is one obliged to unpack all of one’s undeclared assumptions and preconceptions? To self-critically acknowledge potential biases? Or to constantly be attempting to avoid making those assumptions to attain a higher level of impartiality. To an extent, yes, we are called to do this. And there is good reason for doing so to maintain the status of ‘independent expert’.
But the more one reaches for the impartial position, or the more one acknowledges one’s potential biases and assumptions, the less effective is one’s communication to the wider audience.

If we are obliged to stay fully rigorous, then we get stuck in the pages of academic journals. The more we emerge, the more compromised we become, but conversely, the more effective we are in the policy debate of the day. So there is a fundamental question for all of us of where we locate ourselves as researchers? And there is a separate question of where PLPRU wishes to locate itself. Within the membership of the PLPRU, I imagine there are a range of answers to this question, and it is something I hope we can explore today.

Finally, in our title is the type of research we do – ‘Public Law and Policy’. There are many ways of considering the relationship between law and policy, and I don’t pretend to be an expert. But I venture these comments.

First, law and policy can be considered to exist on a continuum in which we start with an idea, formulate it into a policy and implement it through law. Our research can contribute at any point on this continuum.

Secondly, there is an active, reciprocal relationship between law and policy. We have law that shapes, develops, clarifies, constrains and frustrates policy, and we have policy that extends and even on occasions avoids law. Law has many potential functions in this reciprocal relationship with policy. It is our data for analysing and critiquing policy and it provides foundational principles against which we can hold policy to account: such as sovereignty, the rule of law and human rights.

Thirdly, any distinction between law and policy might be irrelevant to our research, and they might be treated as synonymous. This occurs when we bring other perspective and concepts to bare on their analysis indistinguishably. So when we are critiquing asylum policy, we are also critiquing the legal framework that implements the policy.

There are several types of critique that we engage in here. We draw on a variety of disciplinary lenses. Core members of PLPRU are in the disciplines of Politics and History and Psychology. We also draw on theoretical concepts not commonly found in the law – in critiquing asylum policy for example, the lenses of hospitality or cosmopolitanism might be useful. Within the Unit we have academics approaching ‘law and policy’ research in all these ways.

Today we mark the end of the first year of our existence as a Unit. And the series of workshops will showcase some of our on-going projects. 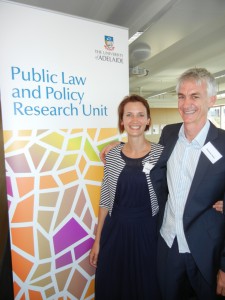 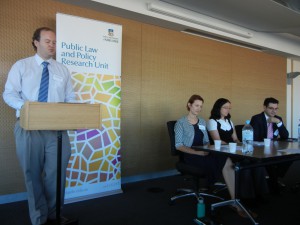 The first panel showcased the work undertaken at PLPRU on Chapter III of the Constitution. Dr Gabrielle Appleby and Anna Olijnyk presented papers, with commentary from Associate Professor James Stellios. 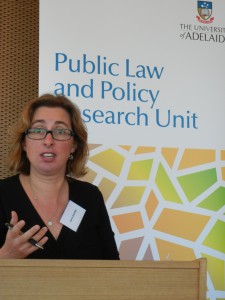 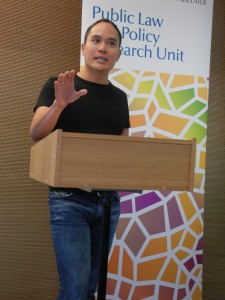 The third panel showcased some of the cross-disciplinary research being conducted at PLPRU in the migration sphere. Dr Joanna Howe and Dr Judith Bannister from PLPRU spoke about their current research projects, and they were joined by Dr Helen Feist, Deputy Director for the Australian Population and Migration Research Centre. The commentator for the session was Associate Professor Joo-Cheong Tham (pictured). 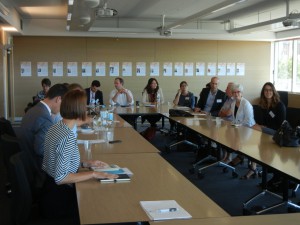 This entry was posted in Government & Citizenship, Research and tagged Public Law and Policy Research Unit (PLPRU). Bookmark the permalink.