The Universe is talking 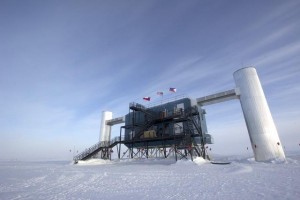 How an incredible discovery at Antarctica’s “IceCube” observatory could reveal some of the most tantalising secrets of deep space.

It’s been described as one of the world’s strangest telescopes. But the remarkable IceCube, occupying a full 1km3 under the Antarctic ice sheet, could soon shed light on some of the Universe’s most tantalising mysteries.

IceCube detects tens of thousands of high-energy neutrinos, ghostly sub-atomic particles, every year. Almost all of these are created by cosmic rays interacting with our atmosphere. Recently, however, an extraordinary discovery was made.

For the first time, a handful of high-energy neutrinos were detected that show distinct signs of coming from somewhere beyond our own galaxy, possibly from powerful sources such as active galaxies, blazars, or gamma-ray bursts.

In scientific terms, it’s a proverbial needle in a haystack. And in this fascinating presentation you’ll learn not only how these particles were found, but what they could reveal about the most distant and energetic objects in our Universe.

Dr Gary Hill is a Future Fellow at the University of Adelaide.

This entry was posted in Past Seminars, Sciences, Seminars. Bookmark the permalink.