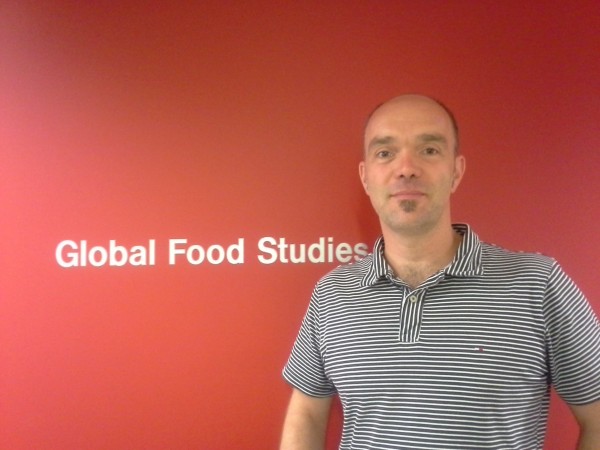 Global Food Studies has been privileged to host Associate Professor Sven Anders from University of Alberta. Prof Anders is visiting Global Food Studies from January to July 2014. He has published extensively on topics related to food and meat marketing, food retailing and consumer demand and international trade.

We talked about his current projects and how these projects address some of the key issues in global food markets including changing consumer demand and issues with agricultural trade.

Prof Anders’s work is currently focussing on at least three topics. The first one is on quality-based product differentiation. His work aims to see how consumers demand for food products with health attributes and how retailers respond to this demand. In an article with Waseem Ahmad in 2012 entitled “The Value of Brand and Convenience Attributes in Highly Processed Food Products“, using data from Canada Prof Anders suggested that there is evidence of consumer preferences for perceived “natural” and health attributes over products with higher degrees of processing.

Prof Anders has also been actively doing research on the relationship between food health attributes and perceptions, food labelling and specific food health outcomes such as Body Mass Index (BMI). In Northern America, there is evidence that consumers who pay more attention to food labels are most likely to have lower BMI. Similarly, his study on the economics of health and vitamin consumption suggested that consumers who take vitamins and supplements are most likely to have better health outcomes.

While most of his work have been focussed on developed countries, Prof Anders has also looked at issues affecting developing countries using global coffee markets as a case study. His work has been motivated by a ‘static’ concept of comparative advantage. Standard international trade theory suggests that a country should export commodities in which it has comparative advantage. However, various factors may influence coffee trade flows from exporting countries (eg Brazil, Indonesia, Columbia). The factors may include political stability, fluctuations in supply of production factors, climate, etc. Therefore, Prof Anders’ work is to assess determinants of the survival of coffee trade using survival analysis which has not been much applied in the trade literature.

Prof Anders’s work is expected to provide contribution to not only development literature but also some policy recommendations on developing global food markets. He views that his work in developed countries have potentials to be adopted in developing countries. Issues such as food labelling have been increasingly important in many developing countries and lessons from developed countries should be taken into account by governments and other stakeholders in developing countries, in particular lessons about what worked and what did not work. These lessons may assist develop strategies to improve global food markets effectively considering complex issues related to human’s health and food production and distribution.

*This article is written based on the interview with Prof Anders on 31 March 2014 and may be subject to the interviewer’s interpretation.

This entry was posted in Research. Bookmark the permalink.