We all know damned lies and statistics can be misleading. So too can graphs, modelling assumptions and the omission or glossing over of critically important information. Take the Finkel report.

The report by chief scientist Alan Finkel on the future security of the national electricity market was released on June 9.

In it, Finkel recommended a “clean energy target” for the electricity sector, rather than an emissions intensity scheme. A CET is similar to the existing shockingly dysfunctional renewable energy target, except (in Finkel’s words) “all fuel types, including coal with carbon capture and storage or gas” would be eligible provided they meet an “emissions intensity threshold”.

In choosing between policy options, a key consideration must be their relative costs. Yet Finkel’s report presented almost nothing on that front, and the little it did was misleading. At one point, it claimed the “overall resource cost” of Finkel’s CET was “similar” to that of an emissions intensity scheme; at another, it said it was “slightly higher”.

What evidence did it provide? A single unreadable bar chart (chart A) with no numbers on it.

This chart purported to show the resource costs of Finkel’s CET and an emissions intensity scheme compared with business as usual.

Looking at the chart, you’d have a hard time seeing any difference between the resource costs of Finkel’s CET and an emissions intensity scheme.

But what matters in considering policy options are the changes in costs those options generate. The Finkel report didn’t disclosed those changes at all. It simply glossed over them. That’s just not good enough.

Finkel cited as the source for chart A modelling work by Jacobs, but that work wasn’t publicly released with his report. That’s not good enough either. The Jacobs report was finally released last Tuesday afternoon, after I kicked up a fuss about its non-release. 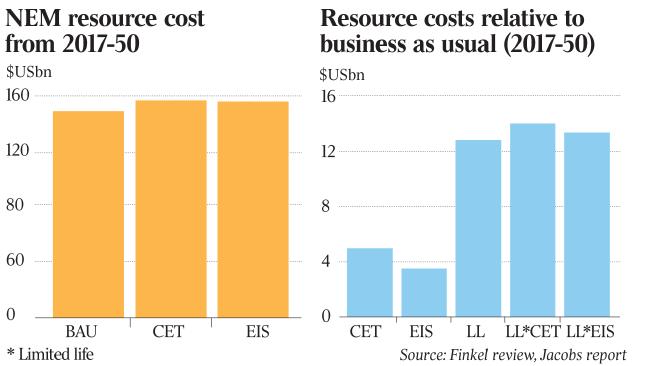 The Jacobs report presented the resource costs in a different way (chart B).

Chart B shows the change in resources costs of various policy options compared with business as usual. Unlike Finkel, Jacobs actually disclosed specific numbers; they show the additional cost of Finkel’s CET is $5 billion — yes, billion — over business as usual. That’s $1.5bn — or 43 per cent — more than the additional cost of an energy intensity scheme.

The Jacobs report also disclosed the cost of abating emissions is only $7.50/tonne under an energy intensity scheme, but $10.50/tonne under Finkel’s CET.

Finkel’s CET is a type of “low emissions target”. Interestingly, a consulting report for the Climate Change Authority dated February 17 found the cost disadvantage of a low emissions target versus an energy intensity scheme was $14bn — much greater than the $1.5bn that Jacobs estimated for Finkel. Guess who the CCA’s consultant was? Jacobs.

The CCA-Jacobs results were also quoted in a joint report by the CCA and the Australian Energy Markets Commission, dated June 1.

The Finkel report simply dismissed the Jacobs-CCA modelling, claiming its low emissions target was “significantly different” to his CET.

But it’s hard to figure out what those differences are because Finkel’s report didn’t specify the details of his CET. Not even the critically important “emissions intensity threshold”.

In fact, according to the Jacobs reports, the emissions intensity thresholds for Finkel’s CET and the CCA’s low energy target are identical.

The reasons why Jacobs estimated a smaller cost disadvantage for Finkel’s CET have nothing to do with any difference between Finkel’s CET and the authority’s low energy target per se. They have everything to do with two key modelling assumptions Finkel told Jacobs to make.

First, Finkel told his consultants to assume that demand does not respond to price. That’s ­astounding economics. In contrast, the costs presented in the Jacobs-CCA report were “demand-adjusted resource costs”, as they should be.

Those costs took account of consumers’ demand responses to price and the welfare gains/losses that result. Inquiries are supposed to consider the public interest. What matters is not supply costs per se but the net benefits (consumer benefits less supply costs).

As demand reductions are an important part of the least-cost way to reduce some emissions, Finkel has understated his CET’s cost disadvantage versus an emissions intensity scheme.

Second, Finkel specified a much weaker emissions reduction. The Jacobs-CCA emissions reductions were consistent with global action to limit global warming to no more than 2 degrees; in that modelling, emissions intensity under both an energy intensity scheme and a low energy target fell to about 0.05t/MWh by 2050.

In the Jacobs-Finkel modelling, emissions intensity in 2050 is five times higher than that.

Finkel’s offhand dismissal of the CCA/AEMC report is ­alarming given Finance Minister Mathias Cormann told the Senate on March 30 the CCA/AEMC report “will be informed by independent modelling … and will be factored into the work undertaken by chief scientist Finkel”.

Finkel has no excuse. He had plenty of time to consider the CCA/AEMC report and the Jacobs-CCA work.

He could have easily engaged with the authority or AEMC to ensure consistent analysis. At the very least, he should have explained specifically why the Jacobs-Finkel and Jacobs-CCA modelling results were different and disclosed and justified his specific modelling instructions.

Finkel also recommended his CET because it had “better price outcomes” than an energy intensity scheme — even though he stated the price difference was “small”.

A CET may have “better” price outcomes only because it subsidises generators with low marginal costs and doesn’t penalise high-emissions generators.

But it’s for these very reasons — plus the lack of price incentives to reduce demand — that a CET is more costly than an energy intensity scheme.

In any case, it’s hardly even-handed to cite a downside of an energy intensity scheme (higher prices) and ignore the upside (the benefits of demand responses that those prices generate).

As Malcolm Turnbull ruled out an energy intensity scheme last December, it is fair enough that Finkel considered a CET.

However, he shouldn’t have obscured and downplayed its cost disadvantage versus an energy intensity scheme.

Well-conducted inquiries clearly and even-handedly state the costs and benefits of policy options — including options ruled out by governments, so we can all see the opportunity costs forgone.

The CCA/AEMC report did that and recommended an energy intensity scheme as the preferred policy option, despite the Prime Minister’s edict.

Dealing with climate change and improving energy security are both vitally important issues. The Finkel review was a great opportunity to achieve progress on both.

Instead, Finkel has produced a shambolic report and wasted that opportunity.

This article first appeared in The Australian, 19 June 2017.

This entry was posted in Paul Kerin. Bookmark the permalink.