How do you get to work? Our researchers abseil. 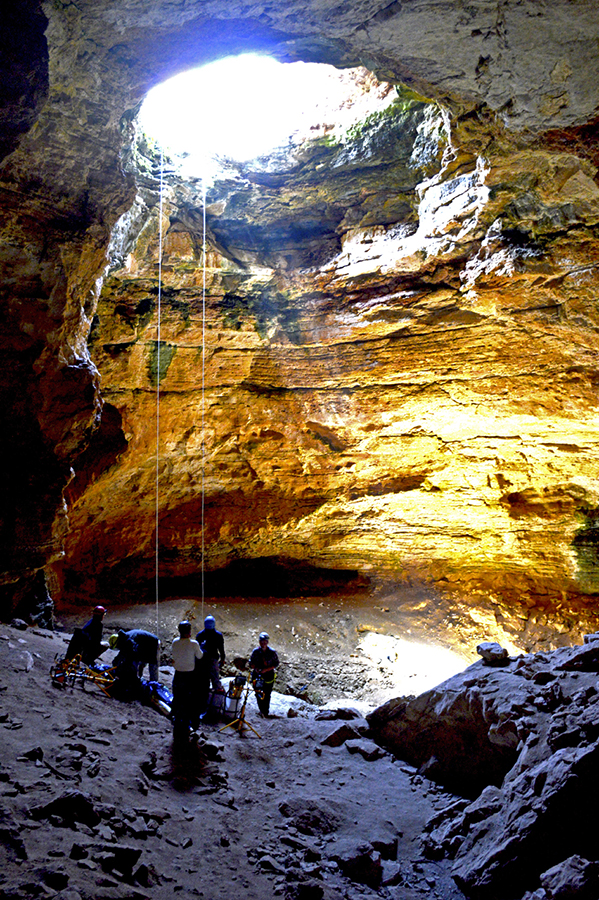 The Environment Institute’s Prof. Alan Cooper has located to a new office  recently. His new locale is 30 metres underground, surrounded by skeletons of creatures that have fallen in to the natural sinkhole over the last 100 000 years. Rather than your average workday commute, some careful rigging and caving skills are required to abseil to the floor of the cave.

The trip to Wyoming to excavate the Natural Trap Cave has been funded by National Geographic and the National Science Foundation. Prof Alan Cooper and Prof Julie Meachen are the leads of the expedition.

Prof Meachen began live tweeting the scientists’ descent into the cave on her twitter account @SaberCatWoman. You can view photos and watch as the action unfolded using the hashtag #NTCave14.

In the video below, which has received over 24 000 views in the last week, Alan Cooper discusses the fossil finds at Natural Trap Cave.

Cooper and his team are particularly interested in the extinction of Ice Age megafauna that became extinct about 10 000 years ago. One such creature is the American Lion, which is 25% larger than the African Lion.

Dr Laura Weyrich explains the main research questions of the expedition on the Australian Centre for Ancient DNA blog:

1)    Was each animal’s population genetically diverse before the time of extinction? (If each species was not very diverse, it suggests that whatever caused them to go extinct started happening before the big Pleistocene extinction date (approx. 10,000 years ago)).

2)    Did the animals living in Wyoming look the same as their relatives in the far north? (Looking different tells us that the animals were evolving to best fit their environment. Then the question is, what are those differences and why do they offer advantages?).

3)    Do we see major genetic changes at the same time as climatic changes? (If so, it suggests that the animals changed in response to the changing climate).

The exploration of the cave has made headlines worldwide including coverage by CNN, CBS News, Reuters, the Daily Telegraph and The Sydney Morning Herald amongst others. 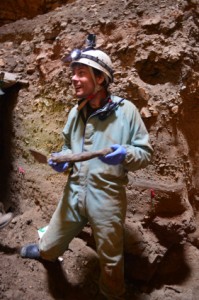 Prof Alan Cooper has also written a personal account of the first week in the cave, illustrating that a career in science can really take you to some amazingly high (or low) places!

“I guess the highlight of that first week was pulling out some intact limb bones in good condition. One of the first was a beautiful camel metatarsal – or camel toe as I dubbed it – a huge bone. About 1 inch was showing in the midst of a compact layer of rocks and sediment, and as I was digging it out (with everyone watching) it just got longer and longer. First I thought it was a bison (due to the width of the end), then a horse (due to the length of the shaft vs the cross section) and then as the joints for the toes appeared – instantly I knew it was a Western Camel (Camelops hesternus) – a relatively rare find in such good condition.”

Remains that have been best preserved will be brought back to universities in the United States and to the Australian Centre for Ancient DNA at the University of Adelaide for testing.

This entry was posted in ACAD, News and tagged #NTCave14, Natural Trap Cave. Bookmark the permalink.