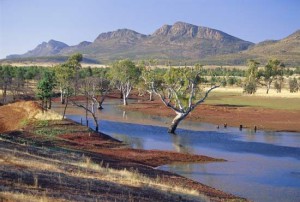 The researchers used detailed biological data collected over time, including from the State’s Biological Survey and the State Herbarium, and a suite of sophisticated metrics to identify biodiverse regions and the potential threats to their conservation.

“We also looked at the extent to which the vegetation of each site was likely to change under future climates,” says lead author Dr Greg Guerin. “We concluded that all of the state’s ecosystems are expected to be impacted but the southern Flinders Ranges location is expected to be the most sensitive of these regions to climate change.

“All of the ‘hotspots’, however, are subject to serious conservation issues, such as habitat fragmentation, weed invasion and altered fire regimes.”

The study found that the southern Mount Lofty Ranges region contained a high proportion of unique species and had high overall diversity but it has been subjected to the highest levels of disturbance since European settlement.

The western side of Kangaroo Island has perhaps the most significant plant biodiversity in South Australia, but was rated as less vulnerable due to higher reservation levels and lower incidences of weed species.

DEWNR’s principal Ecologist Dr Dan Rogers says “This study has contributed to our understanding of South Australia’s native biodiversity, particularly in relation to the relative impacts of climate change”

“By improving our understanding of potential ecosystem change under future climates, we are able to better inform the management of native biodiversity that reflects these climate-induced changes.”

Co-author Professor Andrew Lowe, Chair of Plant Conservation Biology at the University of Adelaide, says: “Importantly, this study measures biodiversity at ecosystem rather than individual species level, and it uses numerical methods which can now be repeated and updated to meet future conservation management requirements.

“Now we have a tool in place that can contribute to how we assess South Australia’s biodiversity.”

On Saturday the 9th April, Professor Andy Lowe was a guest presenter on Channel 11’s youth science program, Scope.   The episode was about the Transects for Environmental Decision-making (TREND) Citizen Science App and the value of citizen science. The Terrestrial Ecosystems component of the TREND is one of the seven major subcontinental transects that make […]

New paper: Constraints to and conservation implications for climate change adaption in plants

PhD candidate Mr Matthew Christmas, Dr Martin Breed and Professor Andrew Lowe from the University of Adelaide’s Environment Institute recently had a new research paper published in Conservation Genetics, entitled “Constraints to and conservation implications for climate change adaption in plants“. Climate change is having a widespread impact on plant and tree populations. This study focuses […]