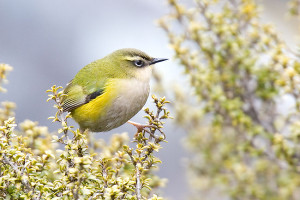 A DNA analysis of living and extinct species of mysterious New Zealand wrens may change theories around the country’s geological and evolutionary past.

A University of Adelaide study into New Zealand’s acanthisittid wrens has provided compelling evidence that, contrary to some suggestions, New Zealand was not completely submerged under the ocean around 21 to 25 million years ago.

The acanthisittid wrens are a group of tiny, largely flightless, birds found nowhere else in the world. They are called wrens because of their similarity in appearance and behaviour to “true wrens”, but they don’t belong to the same family.

“Of the seven species living before humans arrived in New Zealand, only two now remain, the rock wren and the rifleman,” says lead author Dr Kieren Mitchell, Postdoctoral Research Associate in the University’s Australian Centre for Ancient DNA (ACAD). “Consequently, little is known about their evolution.”

Published in the journal Molecular Phylogenetics and Evolution and led by ACAD, the researchers analysed DNA from three of the extinct species along with the two living species.

The research was in collaboration with the Museum of New Zealand Te Papa Tongarewa, Canterbury Museum and the New Zealand Department of Conservation.

“Most surprisingly, we found that some of the wren species were only distantly related to each other, potentially sharing a common ancestor over 25 million years ago,” Dr Mitchell says.

“Previously, researchers have suggested that New Zealand was completely submerged 21 to 25 million years ago, which implies that all of New Zealand’s unique plants and animals must have immigrated and diversified more recently than that time.

“This theory is consistent, for instance, with what is known about the moa, where the different species all shared a common ancestor much more recently than 21 million years ago.

“But the ancient divergences we found among the wrens suggest that they have been resident in New Zealand for more than 25 million years, and possibly as long as 50 million years (when New Zealand became disconnected from the rest of Gondwana).

“As the wrens were largely very poor fliers, or even flightless, some land must have remained throughout that period.

“This has important consequences for our understanding of the evolution of New Zealand’s unique ecosystems.”

Researchers from the Environment Institute have been honoured as finalists for the 2016 South Australian Science Excellence Awards. The awards recognise and reward outstanding scientific endeavour, including its application in industry and the advancement of science and mathematics education. Our congratulations goes to Dr Kieren Mitchell, who has been nominated for PhD Research Excellence and Early Career […]

New Zealand claims back the Kiwi after ancient DNA testing

Almost 20 years ago, Alan Cooper from the Australian Centre of Ancient DNA found that the Kiwi might actually originate from Australia. Given that the emu and cassowary are the Kiwis closest living relatives and that New Zealand split off from Australia when Gondwana broke up, this was a logical suggestion. Alan Cooper is from […]