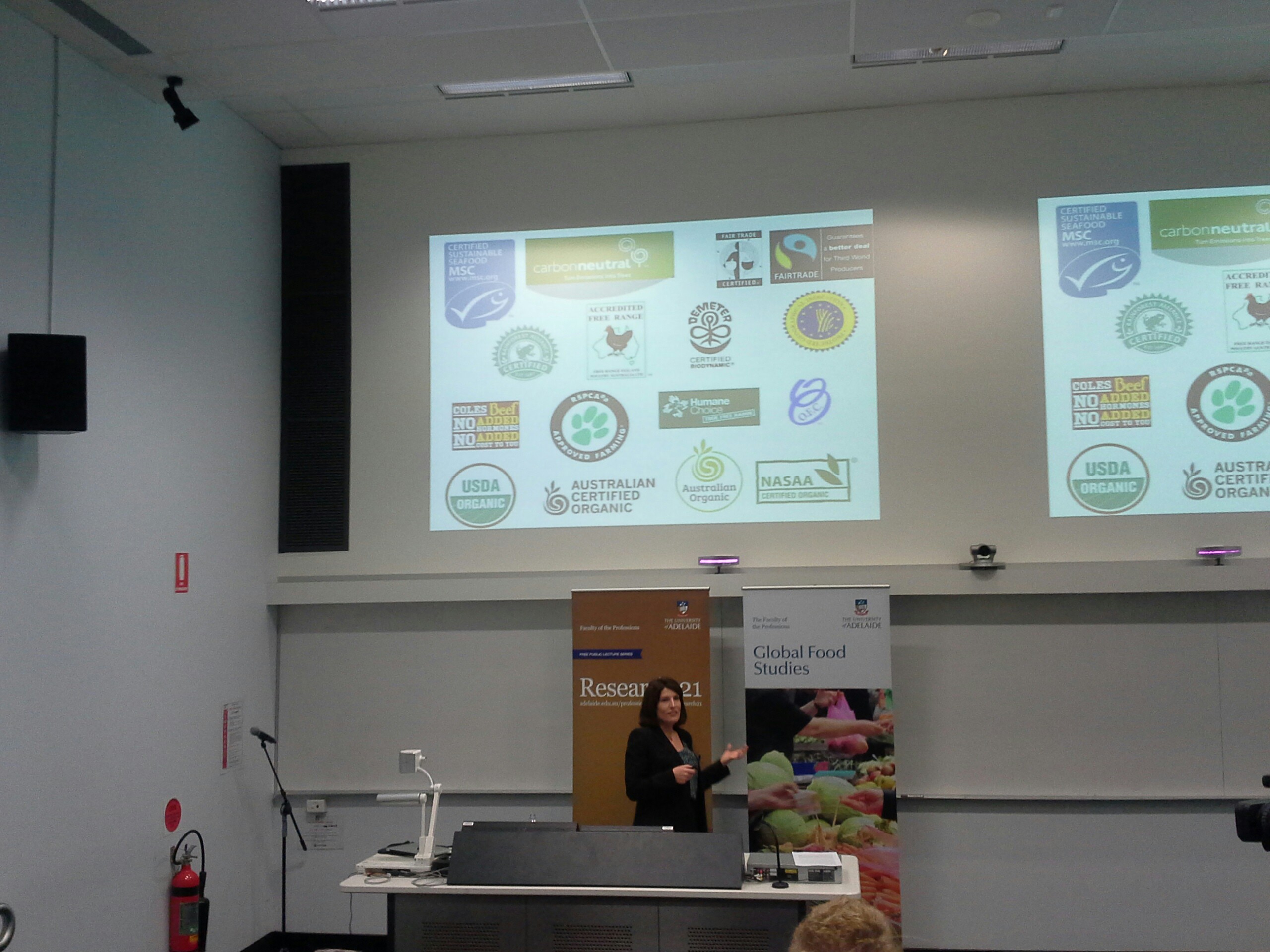 Director of Global Food Studies, Associate Professor Wendy Umberger delivered her speech “Food for thought: Changes in the global food sytem and how they may affect you” at the inagaural Research 21 Public Lecture Series organised by the Faculty of Professions, University of Adelaide on Thursday evening 29 May 2014. The forum was well-attended by representatives from food industry in South Australia, research communities and others. Prof Umberger discussed why there is an increasing need for more effective food policy, changes in food systems in developing as well as developed countries and how these may affect our consumption behaviours.

Changes in the global food system may bring implications for how policy makers design food policy. Improving translation and uptake of research and development are increasingly important to better understand how decisions of all stakeholders including individual farmers, firms and institutions are influenced. Evaluation of the role of government is also essential. Theoretically, governments should only intervene the markets if there is strong evidence of market failures. These market failures include the lack of investment by private sector in public goods (eg food security and food safety), externalities considering increasing use of inputs in agriculture, climate change and obesity; inequality in market power and asymmetric information.

Prof Umberger re-emphasised the definition of Food Security as defined by the FAO:

“Food security is a situation that exists when all people, at all times, have physical, social and economic access to sufficient, safe and nutritious food that meets their dietary needs and food preferences for an active and healthy life”

The definition has evolved from 1970s when it was only defined as “adequate world food supplies” to the current definition (set in 2001) which includes the safety and nutrition as well as dietary preferences such as religious dietary requirements, genetically modified food vs non-GM food, etc. In principle, there are four dimensions of food security, namely availability, economic and physical access to food, food utilisation and stability over time.

Despite increasing interests in improving food security, substantial challenges remain. The FAO estimates that nearly 870 million people of the 7.1 billion people in the world, or one in eight, were suffering from chronic undernourishment in 2010-2012.

Prof Umberger viewed that some of the demand forces which are driving food system transformation include:

In less developed countries, Prof Umberger suggested that demand forces which drive changes in the global food system include:

Forces driving the transformation of the global food system are also observed in the supply side. These include:

Prof Umberger also discussed food safety issues by giving examples of two of her research projects in Indonesia and Australia. Her research in Indonesia investigated whether traditional markets have been crowded out as a result of the growing number of modern supermarkets in Indonesia. The project concluded that it is unlikely that traditional food retailers will be crowded out given consumers’ perceptions which value the products being sold at traditional markets are “fresher and have more varieties”. The project also highlighted opportunities for farmers who are able to “upgrade” to meet higher quality standards set by modern retailers. Assistance with inputs, credits, and technical assistance may be useful. The penetration of supermarkets in Indonesia, however, raises concerns over the diets. While these retaileers allow consumers to access more varieties of foods such as dairy, fruits and vegetables and processed food, Prof Umberger observes the link between the frequency of supermarket shopping and obesity.

Prof Umberger also talked about her consumer research in Australia using beef consumer behaviours as a case study. She argued that:

Australian consumers are confused about the benefit of food claims.

Australian consumers are willing to pay premium prices for food with nutrition and health claims (eg National Heart Foundation) and the ones related to production methods (eg Meat Standards Australia). A question to be discussed was whether those claims have real benefits and whether it is neccessary for the government (either local or federal governments) to ‘intervene’ and set stricter regulations. Addressing this question will require a further investigation into the cost-benefit of such a change in regulatory framework.

Prof Umberger closed her talk by highlighting how these changes in the global food system may impact us. Our food may come from more “distant” locations. This may not necessarily increase our risks given better technologies that we have now than years ago (eg technology to track pathogens in food). Consumers, however, should seek for more information – dont be mislead and realise that there is a trade-off between being a foodie, food sovereignity and food security.