International research involving the University of Adelaide has shed new light on the origins of some of the most widely spoken languages in the world.

Three billion people today speak a language that is part of the Indo-European family of languages, spanning Europe as well as Central, Western and South Asia. But the reason why these languages – such as English, Spanish, Russian and Hindi – are related has been a source of some argument for more than two hundred years.

New research published today in the journal Nature, led by University of Adelaide ancient DNA researchers and the Harvard Medical School, shows that at least some of the Indo-European languages spoken in Europe were likely the result of a massive migration from eastern Russia.

“This new study is the biggest of its kind so far and has helped to improve our understanding of the linguistic impact of Stone Age migration,” says co-first author Dr Wolfgang Haak, from the University of Adelaide’s Australian Centre for Ancient DNA (ACAD). “Using genome-scale data from more than 90 ancient European people, ranging from 3000-8000 years old, we were able to trace these people’s origins.”

The researchers found evidence of two major population replacements in Europe during the Stone Age. The first was the arrival of Europe’s first farmers, who had spread from the Near East (modern-day Turkey).

“Their genetic profiles show remarkable similarity despite vast geographic distances and differences in material culture. Whether from Hungary, Germany or Spain, the first farmers are genetically almost identical and must have come from the same origin,” says ACAD Director Professor Alan Cooper, co-author on the study.

Co-first author of the study Dr Iosif Lazaridis, a postdoctoral fellow at Harvard Medical School, says remarkably, the hunter-gatherers that lived in Europe did not disappear after the first farmers moved in. “By 6000-5000 years ago, a resurgence of hunter-gatherer ancestry had occurred in agricultural populations across Europe,” he says.

Surprisingly, a third ancestry component, with its origins in the east, was found to be present in every Central European sample after 4500 years ago, but not before that time, marking the second population turnover. “It was a Eureka moment when we looked at the new data,” says Dr Lazaridis.

The team estimates that the so-called “Corded Ware” people (named after their distinctive pottery) had 75% of their ancestry from the eastern steppe. “This large migration almost certainly had lasting effects on the languages people spoke,” says Dr Haak. “This later migration sits well with linguists who had suggested a more recent spread of Indo-European, based on similar words for wheeled vehicles that had only been in use since 5000 years ago.”

The leader of the study, Professor David Reich of Harvard Medical School, the Broad Institute, and the Howard Hughes Medical Institute, says: “These results challenge the other popular theory that all Indo-European languages in Europe today owe their origin to the arrival of the first farmers from Anatolia more than 8000 years ago.”

He says the new study doesn’t solve the centuries-old problem of the homeland of all Indo-European languages, which are distributed widely in Eurasia. However, the team is optimistic that a solution may be within reach. “We now want to understand how the people of Europe 3000-6000 years ago were linked with those in the East, the Caucasus, Iran and India, where Indo-European is also spoken,” Professor Reich says. 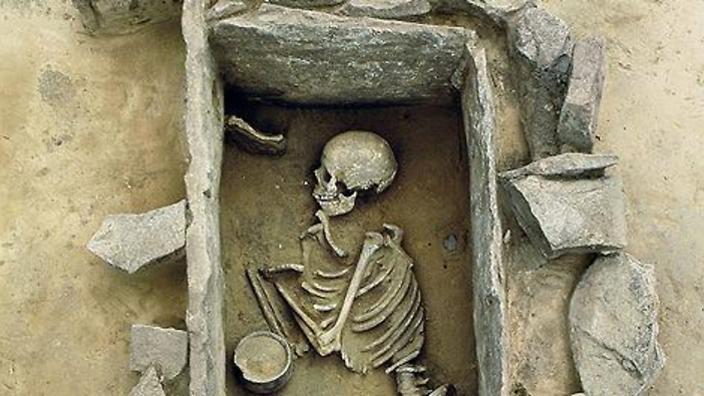 This story has also been covered in ABC Science Online, SBS and The Australian.

Podcast: Health and the human microbiome

Dr Laura Weyrich, DECRA Research Fellow from the Australian Centre for Ancient DNA at the University of Adelaide was interviewed by Sarah Martin on Radio Adelaide’s The Sound of Science Program. In Laura’s interview she expands upon what can be learnt from the evolution of the human microbiome and how it can inform approaches to current […]