Dr Diego Garcia-Bellido has been conducting some interesting work on Emu Bay in Kangaroo Island. The most recent research was published in BMC Evolutionary Biology and involved the controversial findings that bizzare fossils called “vetulicolians” were in fact, distant cousins of humans.

The new vetulicolian fossils discovered at the Emu Bay site are an astounding 500 million years old. The fossils studied show a straight narrow structure like a notochord, a precursor to a backbone that would have been made of cartilage originally. This places the vetulicolians higher up in the evolutionary tree than first thought.

Other fossils from the Cambrian period have also been found by Diego and his team at the Emu bay site, including two early arthropods: one species is still indeterminate, and the other has been found to have sophisticated optics in the eyes of the fossil, with up to 30,000 lenses!

This latter fossil is the apex predator of the Cambrian: the >1.5m-long Anomalocaris. The research was published in Nature in 2011 in two papers entitled: Modern optics in exceptionally preserved eyes of Early Cambrian arthropods from Australia and Acute vision in the giant Cambrian predator Anomalocaris and the origin of compound eyes.

Find out more about Diego and his fascinating research in the following interview (originally published for Laboratory Equipment Magazine). 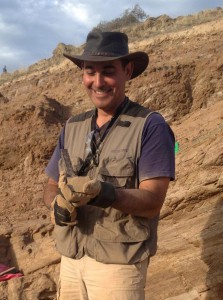 Diego Garcia-Bellido in the field

I am a biologist, and I am keen on understanding the evolution of life in the past, and in particular how the first animals appeared on Earth, with the Cambrian ‘explosion’ about 500 million years ago, what they looked like, how they lived, how they were related to each another… In order to do this you have to search for fossils, which are evidence of these early animals found in rock, or even better: find their buried bodies with as much preserved detail as possible. When we study fossils we act like a detective in a crime: you want to find as much information as you can, so you don’t settle for a footprint or a piece of chewing gum: you want a body, if possible with documentation or at least usable DNA, some sort of indication of what happened to the victim, to know if someone had a motive, etc…

What are the future implications of your research?

The discovery of “soft-bodied” fossils (those that preserve not only bones and shells, but also the delicate structures like skin, eyes, muscles, blood vessels, even the last meals) is of paramount importance in giving us as clear an idea as possible of this early evolution of animals. The findings by my colleagues and I is showing that the diversity and complexity of animal life was very significant, even from the start. In the case of the Chordates, the group of animals that includes us and other vertebrates, plus lancets and sea squirts, we have discovered that the early disparity (how morphologically different the various taxa are) was considerably more than we ever had envisioned.

What was the most surprising thing you found in your research?

I would have to say that our most surprising find in Emu Bay Shale (EBS) is the preservation of up to 30,000 lenses in the compound eyes of the giant arthropod predator Anomalocaris, even more than the most acute arthropod eyes known today, which belong to the also predatory dragonflies. Each lens can be compared to a pixel in a digital camera: the more pixels, the finer the picture. And what’s even more impressive is that Anomalocaris: developed such acute visual system within a few million of years since the Cambrian ‘explosion’.

What is the take home message of your research and results?

My colleagues and I aim to understand what the conditions were for the first biodiversity radiation in our planet and how those early animals lived, and how they eventually evolved into other beings or became extinct. This can allow us to better understand life on Earth on the present day, and make us realize that although science has described more species alive today than those known in any given time in the fossil record, the reality is that what is alive today only constitutes about 1% of the diversity that has ever inhabited this planet.

What new technologies did you use in your lab during your research?

One of the advantages of the type of work we do is that it is generally quite inexpensive, compared for instance with particle physics, cancer research or the exploration of space. We to travel to the fossil sites, where we dig with picks, shovels, and geological hammers (occasionally jackhammers), and later study the fossils in the museum/university with binocular microscopes and photograph with digital SLRs… However, we sometimes do use a bit more technical equipment such as standard Electron Microscopy, Energy-Dispersive X-ray spectroscopy (EDX), microCT scanning, and even synchrotron microtomography.

What is next for you and your research?

We will continue to study the Emu Bay Shale locality in Kangaroo Island where the new vetulicolian and the Anomalocaris eyes were found (among more than 50 other species), plus search for new sites with similar quality of preservation and age in South Australia and Northern Territory. I also plan to search for sites like EBS in the Cambrian rocks of South America with my Argentinian colleagues.

This interview was originally published at laboratoryequipment.com for the “Scientist of the Week” feature.

More than 100 years since they were first discovered, some of the world’s most bizarre fossils have been identified as distant relatives of humans, thanks to the work of University of Adelaide researchers. The fossils belong to 500-million-year-old blind water creatures, known to scientists as “vetulicolians” (pronounced: ve-TOO-lee-coal-ee-ans). Alien-like in appearance, these marine creatures were “filter-feeders” […]