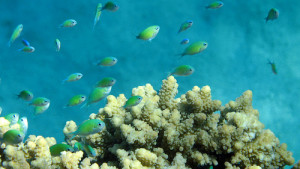 The ability of baby fish to find a home, or other safe haven, to grow into adulthood will be severely impacted under predicted ocean acidification, University of Adelaide research has found.

Published today in the journal Proceedings of the Royal Society B, the researchers report the interpretation of normal ocean sound cues which help baby fish find an appropriate home is completely confused under the levels of CO2 predicted to be found in oceans by the end of the century.

“Locating appropriate homes is a crucial step in the life cycle of fish,” says Tullio Rossi, PhD candidate with the University’s Environment Institute. “After hatching in the open ocean, baby fish travel to reefs or mangroves as safe havens to feed and grow into adults.

“Baby fish can find those places through ocean noise: snapping shrimps and other creatures produce sounds that the baby fish follow.

“But when ocean acidity increases due to increased CO2, the neurological pathways in their brain are affected and, instead of heading towards those sounds, they turn tail and swim away.”

He and his collaborators also found that high CO2 makes baby fish move slower and show more hiding behaviour compared to normal fish. This could make it more difficult for them to find food or habitat and to avoid predators.

“Such misinterpretation of sound cues and changes in other behaviours could severely impact fish populations, with the number of young fish finding safe habitats dramatically reduced through their increased vulnerability to predators and reduced ability to find food,” Associate Professor Nagelkerken says.

There is still time to turn around this scenario, Mr Rossi says. “We have the capacity to steer away from that worst-case scenario by reducing CO2 emissions,” he says. “Business as usual, however, will mean a profound impact on fish populations and the industries they support.”

Scientists have identified the key drivers of why some species are absent from reefs in the Indian and Pacific oceans, and which species are most vulnerable. Incorporating this knowledge in to conservation strategies will help to reduce human impact on species loss. Published in the journal Nature Communications, the findings are the result of an […]

Heidi Alleway, Professor Bronwyn Gillanders and Professor Sean Connell from the University of Adelaide’s Environment Institute have found that the colonisation of Australia contributed to an overexploitation of inland fisheries species. Their paper entitled, ” ‘Neo-Europe’ and its ecological consequences: the example of systematic degradation in Australia’s inland fisheries,” published in Biology Letters, compared fish market […]

Climate change is creating stress on ecosystems globally, including in our oceans. University of Adelaide research shows that these stresses are affecting fish. Associate Professor Ivan Nagelkerken spoke with Sue Reece from Radio Adelaide about his research into the impacts of ocean acidification on fish. Listen to the full interview.

Podcast: Ocean acidification could cause fish to be lost at sea

New research shows that increased CO2 levels interfere with the ability of baby fish to find a home. Sarah Martin from Radio Adelaide spoke with University of Adelaide marine biology PhD student Tullio Rossi about his research into the effects of ocean acidification on fish behaviour. Listen to the full interview.

The Environment Institute congratulates PhD student, Tullio Rossi for receiving 3rd prize in the Inspire Australia Research Competition for his video, “Lost at sea”. Tullio is a marine biologist studying the effects of ocean acidification on fish behaviour, with particular focus on sound-driven orientation. His research for the video was conducted as part of his […]