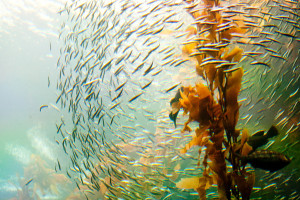 A world-first underwater study of fish in their natural environment by University of Adelaide marine ecologists has shown how predicted ocean acidification from climate change will devastate temperate marine habitats and biodiversity.

Published today in the journal Nature Climate Change, the researchers used natural CO2 underwater seeps to study how entire ecosystems have been impacted by the resulting acidification of the water.

They compared ecosystems in the high-CO2 levels found at volcanic vents in temperate waters in both the Northern and Southern hemispheres with adjacent ecosystems with present-day levels of CO2. These underwater vents have specific sites that release CO2 into the water at concentrations predicted for the end of the century.

“Human greenhouse gas emissions are rapidly acidifying our oceans,” says project leader Associate Professor Ivan Nagelkerken, Australian Researcher Council (ARC) Future Fellow with the University’s Environment Institute. “Using these CO2 seeps, we’ve been able to get a unique preview of what the future ocean will look like under current projections for the end of the century – and it’s not good.

“Previous studies have largely looked at how single fish species are affected by acidification in laboratory experiments. But we used these ‘natural laboratories’ to see the effects on whole ecosystems, as well as how acidification affects the behaviour and physiology of individual species.”

The study confirmed previous laboratory research which showed acidification of the water affects fish behaviour, for example, by reducing the escape response from predators.

But there were some surprising results. When the fish were close to shelter in their natural environment, this negative effect of acidification disappeared.

“We also found that some species were more abundant in the acidified waters. But these were common or generalist species such as gobie and triplefin fishes which doubled or even tripled in number to the detriment of other species,” Associate Professor Nagelkerken says.

The most dramatic finding was the marked habitat shift found in the high-CO2, acidified waters.

“As you swim from one area to the other you see a dramatic difference,” says co-author Professor Sean Connell. “One minute you’re in a kelp forest with one metre high kelp and lots of different fish. Then you move into the vent area where everything is barren with short turf algae, just a few centimetres high and devoid of the life and colour of the other areas.

“Ecosystems represent complex interactions between different species, and between species and their environment. Our research has given us a greater understanding of increasing CO2 emissions as a driver of ecological change and what this might mean for future marine biodiversity and fisheries production.”

The Environment Institute congratulates PhD student, Tullio Rossi for receiving 3rd prize in the Inspire Australia Research Competition for his video, “Lost at sea”. Tullio is a marine biologist studying the effects of ocean acidification on fish behaviour, with particular focus on sound-driven orientation. His research for the video was conducted as part of his […]

Associate Professor Ivan Nagelkerken from the University of Adelaide’s Environment Institute was interviewed by The Lead about his research into the effects of ocean acidification on marine environments. The research undertaken by Ivan Nagelkerken, Bayden Russell, Bronwyn Gillanders and Sean Connell, has been published in Nature Climate Change. The study details how predicted ocean acidification from climate […]

The Great Southern Reef – have you heard of it?

Professor Sean Connell from the University of Adelaide was one of the authors on a collaborative article among six scientists across Southern Australia published in The Conversation. The article highlights the need to increase awareness of the true value of the Great Southern Reef so that it can be managed effectively now and for future […]

The Sound of Science spoke with marine biologist Dr Zoe Doubleday from the University of Adelaide about her research using hard calcified tissues, such as bones, shells and teeth of marine and fresh water animals to gain a better understanding of how those animals lived, how they are affected by changes in their environment, and how […]

Inaugural lecture by Professor Bronwyn Gillanders – The fascinating ecological and environmental insights being revealed by marine organisms’ hard body parts. Although marine waters present a challenging research environment, the remarkable data obtained there by the University of Adelaide’s Professor Bronwyn Gillanders and her team has proven well worth the effort. Studying the hard structures of […]

Mangroves and other coastal ecosystems are important nurseries for recreational and commercial finfish and shellfish species. Yet almost half of the global coverage of mangrove has been lost due to humans. To sustain their important ecosystem services adequate management is needed. However, evaluation of their nursery role for management purposes is largely based on protecting […]