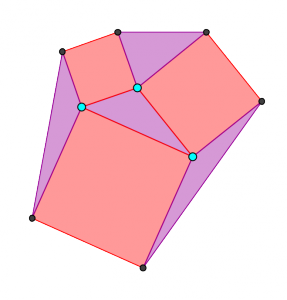 When you construct the picture in this way then the following is true: the four triangles each have the same area!

The thing that makes it even cooler is why the four triangles all have the same area. If you rotate one of the side triangles until its edge meets the middle triangle, you’ll make one bigger triangle. The two triangles have the same base length and their top points are in the same place, so they also have the same height. So they must have the same area, since the area of a triangle is determined by the length of its base and the height of the point above the base.

Again I say: isn’t that cool?