Where the complex points are: on a line

This is the second in what has turned out to be a series on Where the Complex Points Are.

In the introduction, I described the place where the complex points are: at each point (a,b) in the real plane, there is an iplane attached, which contains all the points (a+ci,b+di). These points are arranged with the x-axis showing the imaginary part added to the x-coordinate and the y-axis showing the imaginary part added to the y-coordinate. I imagine them as being a transparent sheet attached to the point itself and being able to be flattened out to sit on top of the real plane. 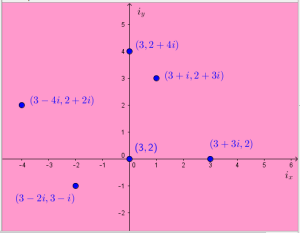 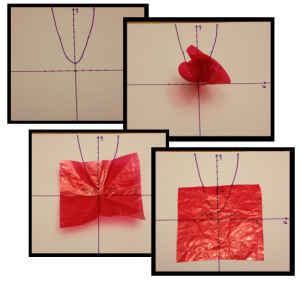 In this post, I want to talk about where the complex points are on a line. This is the first reason why this representation of complex points is so very cool.

But we know that at every point there is an iplane attached which holds all the complex points. Which of these complex points are part of the line? First we need to remind ourselves that a point is on a line when it satisfies the equation of the line. That’s fundamentally what an equation is for: deciding if a point is part of a set or not.

There is a pattern forming here: in order to get my complex point to be on the line, I need to make sure the imaginary parts are the right sizes so that they subtract away when I put them in the formula. The real parts have to create the number 3 I need as well, which means the real parts have to satisfy the original equation.

Let’s do this with algebra: 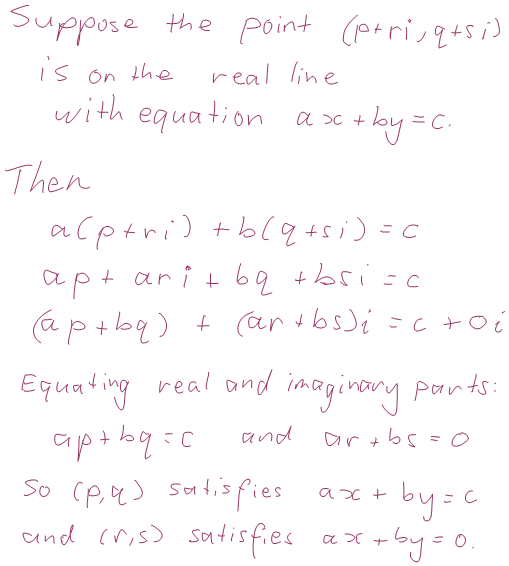 But it gets better! The complex point (p+ri,q+si) is the point with coordinates (r,s) in the iplane at (p,q). And the point (r,s) has to satisfy the equation ax + by = 0. That means the point (r,s) lies on a line parallel to our original line passing through the centre of the iplane. When you take the iplane at the point (p,q) and lay it flat on the real plane, the complex points in that iplane that are part of the line will lie on top of the existing real line! This is because they are on a line parallel to this line passing through a point on this line.

So in our representation, the complex points on a real line aren’t just in the iplanes attached to the real line, they look like they are actually on the line! Isn’t that cool?!! 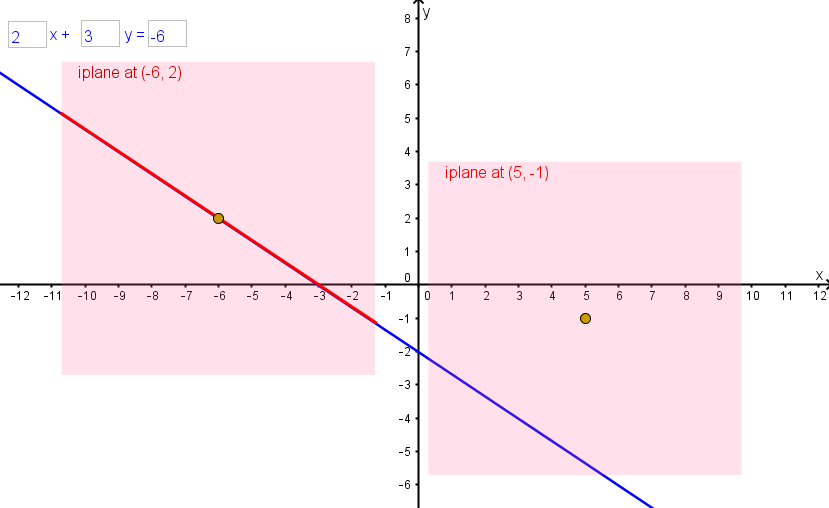 You can play around with the iplanes attached to real lines in the following GeoGebra applet.

A line with real slope

There are a whole lot of lines in the complex plane that aren’t real lines. The first kind I want to deal with is those with real slope. That is, their equations are of the form ax + by = c + fi for some non-real number c+fi and real numbers a and b. This kind of line has no real points at all – it’s not possible to put real numbers into ax + by and get a non-real result. But where actually are all the non-real points on this line? 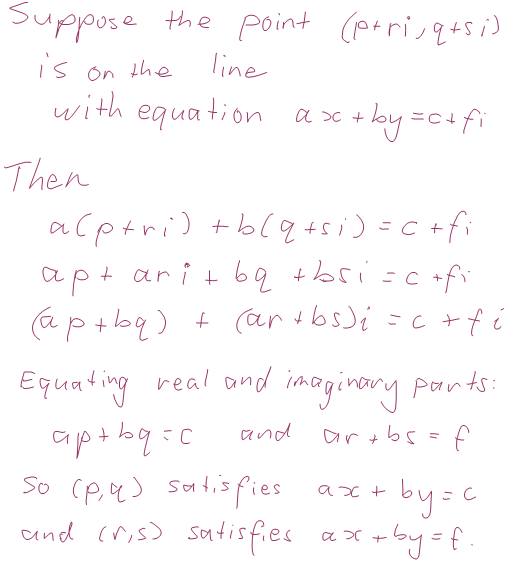 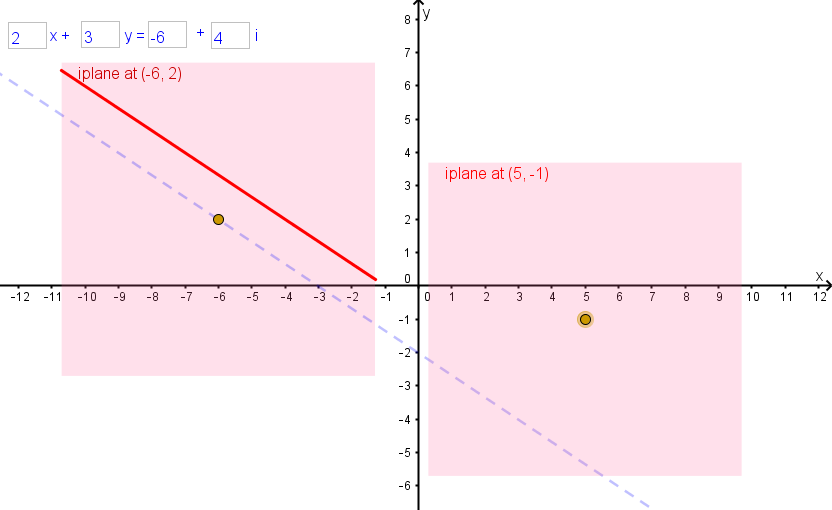 You can investigate these kinds of lines using this GeoGebra applet. 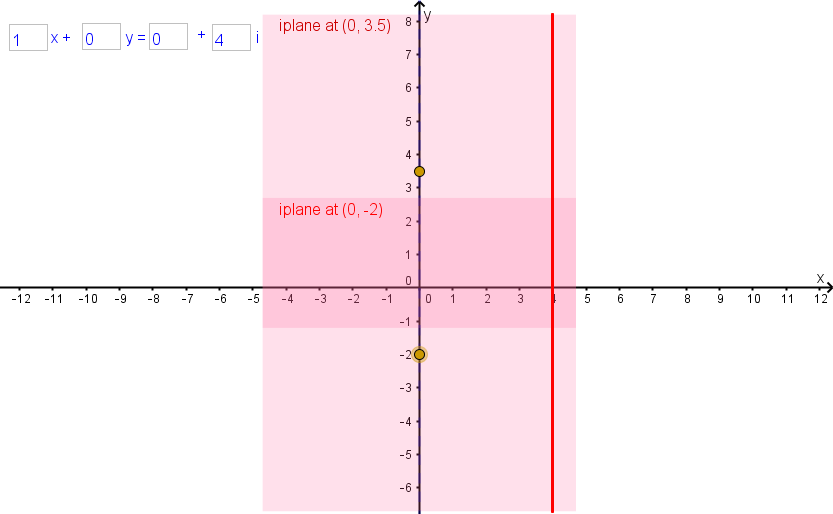 A line with unreal slope

The last kind of line is a line with unreal slope. It would have an equation like (a+di)x + (b+ei)y = c+fi. You’d need to make sure that a+di and b+ei weren’t related by a real multiple or you could divide by some complex number to produce real coefficients for the x and y — we’ve already covered lines like that. In fact, it must therefore be possible to arrange it so that the y-coefficient is 1. In that case, we might as well write it in “slope-intercept” form, which might be a bit easier to process. So let’s take a look at the line with equation y = (a+di)x + (c+fi). 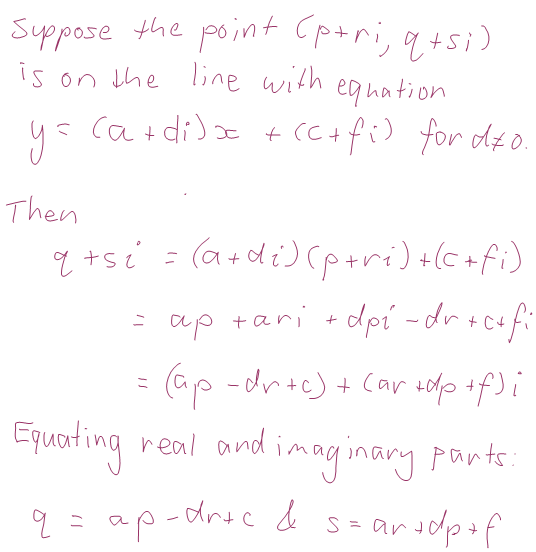 Hmm. That’s not particularly edifying. What does that mean? Why don’t we pick an iplane and see what the points on our line look like in this iplane: 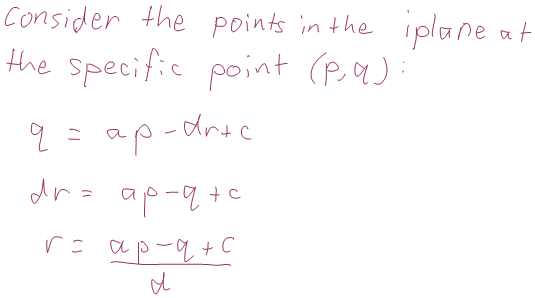 This means that given (p,q), we can find a unique value of r. Substituting this into the other equation gives us a unique value of s. That is, every iplane has exactly one point of this complex line! You can investigate what these points look like with this GeoGebra applet. 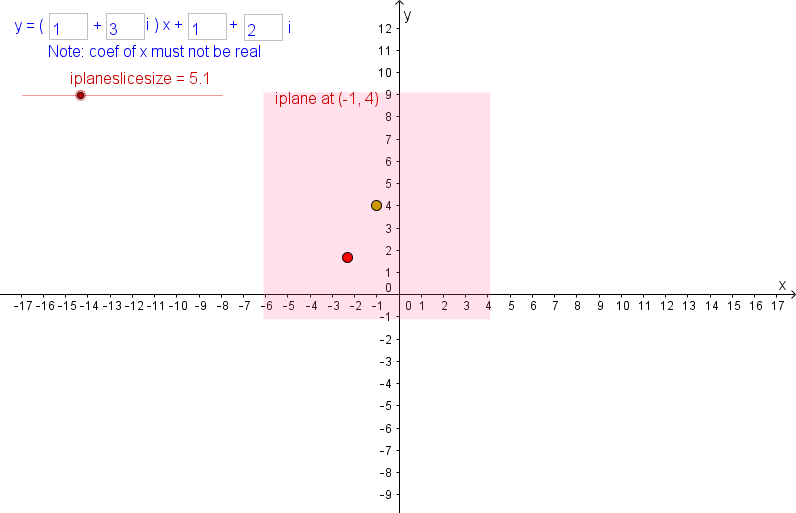 Note that there is in fact exactly one real point every line with complex slope. Using the notation above, it’s the point (-f/d, -af/d+c). It’s quite hard to find the point by trial and error in the GeoGebra applet!

So there you have it. Using iplanes, the lines with real slope actually look like lines, and the lines with unreal slope are a cloud of points with one in each iplane. In the next post, I’ll talk about parabolas…