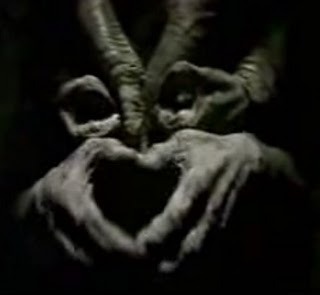 In recent weeks, a new artwork has appeared on the walls of Hub central. They used to have people’s faces, and now they have people’s hands in various poses.

For some reason this reminds me of a particularly fascinating scene in the most excellent film “Labyrinth”, which you can check out on YouTube here:

Here is a description of what happens in case you can’t or don’t want to watch it yourself.

The main character Sarah tumbles down a well and is caught by a multitude of hands growing out of the walls of the well. She screams, “HELP!!!” and at that point several of the hands move together to form a face, which says, “But we are helping — we’re Helping Hands.”

Sarah says, “But you’re hurting me!” and the hands respond by saying, “Would you like us to let go?” at which point they do let go and let Sarah fall for a second before catching her again.

The hands then ask Sarah which way she wants to go: “Up or down?” They badger her until she finally decides she wants to go down. At this there are peals of laughter and yells of “She chose dooown!” as the hands help her smoothly downwards.

Sarah asks, “Was that wrong?” and the only response is, “Too late now!” before she is dumped in the darkness of the Oubliette.

Now this scene made me think of teaching staff I have known (and been). Students are given a task to do, with what seem like deceptively simple instructions, and they do what they think is best in response. And yet they still get disappointingly low marks. Often the person marking their work gives no indication of what the person did wrong and how to make it better.  The student says “Was that wrong?” and the teacher silently replies through their lack of feedback “Too late now!”.

And yet so many of these same staff think they’re actually helping the students. They think it’s somehow wrong to tell students what the teahcer’s actual expectations are because then they are “spoonfeeding” them. “They have to learn how to do these things themselves,” say the teachers.

It makes me angry to think that through just a few simple words we as teachers can make a big difference to the students’ lives, and yet we don’t say them because we think we’re being “helpful”.

Having the title of “Helping” Hand does not mean that what you are doing is helping.

This entry was posted in Being a good teacher and tagged movies, study skills. Bookmark the permalink.