The reorder of operations

The community of maths users the world over agrees that when evaluating an expression or calculation, some operations should be done before others. Mostly it’s to prevent us having to be needlessly specific about what order to do calculations in, mathematicians being very concerned with efficient communication.

When you learn it at school, it usually goes something like this:

The name I learned for this order of operations was… the Order of Operations. Many other people call it BODMAS, BIDMAS, BEDMAS, PEDMAS, PEMDAS, and other similar combinations. I remember coming to university in Adelaide and my new South Australian friends kept saying “BODMAS” and I had not the slightest clue what they meant. Even now I don’t like using the acronym as the name for the concept itself.

My problem with the order of operations as stated above is this: it’s wrong! It’s wrong because you almost always don’t do the operations in the order described. You don’t do all the multiplications before all the additions, and instead will often quite a few of the additions first because they are easier. And you don’t do the multiplications in the order they come, but rearrange them into some other easier order. And you often don’t do the brackets first, but instead choose expand them out in order to make the calculation easier.

If you followed the order of operations to the letter as it is usually described, you will have a very inflexible way of approaching calculations, which will enforce quite a bit of unnecessary and difficult work. Take the simple calculation 3 ÷ 2 × 4. I know that I can multiply the 3 and the 4 before doing the dividing by 2, which greatly simplifies my working compared to having to divide the 3 by the 2 and then multiply by 4. A large number of students who know BODMAS don’t realise they are allowed to do this sort of thing.

What we experienced users of maths use is not a rigid set of rules for the order to calculate in, but a set of rules that tells us when we can be flexible and still produce the same result. Things like “if it’s all + then do it in any order” or “if it’s all × and ÷ then you can do all the things after × signs in any order”. I like to think of the operations as a sort of glue, and some operations have a stronger glue than others. Addition is the weakest glue, with subtraction only marginally behind because it sticks to the things to its right. Powers have the strongest glue, after brackets, which are really more like sticky-tape.

In my head, the order of operations isn’t even in words at all. It’s much more like this picture: 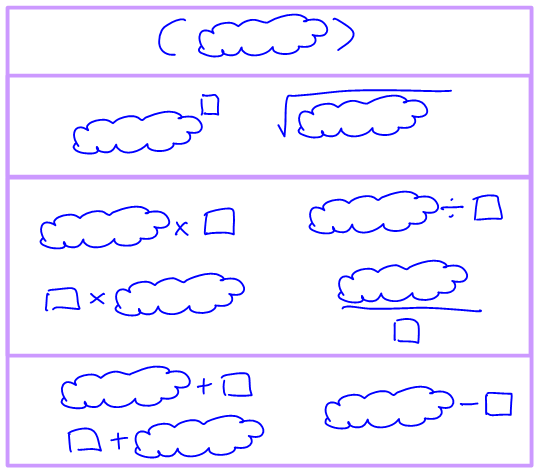 or this simplified version: 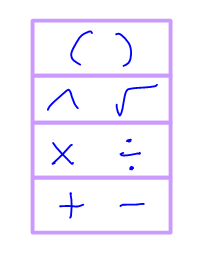 Whenever I teach students one-on-one about doing calculations, we talk about what ways there are to be flexible so that they can choose more efficient methods, and I draw these pictures. It seems to help them be more flexible rather than blindly follow an order that restricts them.

This entry was posted in Being a good teacher, Thoughts about maths thinking and tagged fundamentals, maths. Bookmark the permalink.