Four alternatives to the four fours

The “Four Fours” is a very well-known little problem that encourages some creative thinking and use of the order of operations. It goes like this:

Using exactly four of the number 4, any of the operations +, -, *, / and as many brackets as you like, see if you can produce all the natural numbers from 1 to 20.

Taking these instructions at face value, there are some numbers you simply can’t make with exactly four fours, and it’s rather interesting to watch how people deal with this. Mostly they come up with creative approaches to subvert the instructions, by allowing you to concatenate 4’s to make bigger numbers, or allowing a decimal point (shamefully without a zero in front of it). It worries me that no-one takes a more systematic approach and asks if they could produce all the missing ones with just one of these innovations, or asks exactly how many outcomes there are with the original operations only.

I must confess I made this one up tonight in order to make my title have four alternatives rather than three. But it’s still, I think, a very interesting problem. It requires you to think about how zeros appear in the digits of a number when you do operations, and it is surprisingly difficult to come up with even one solution, letalone several (and yes there are several solutions).

UPDATE: We tried this at One Hundred Factorial today (the day after the post). Originally we used just the first four numbers 10, 100, 1000, 10 000, but every single person came up with the same first solution and then got stuck. Using five numbers seems to give simultaneously more scope for different answers and a more varied set of first answers. Either way, it was as interesting as predicted!

FURTHER UPDATE: I tried this in a Year 7 classroom, and a whole lot of interesting things happened! Check it out here.

I find this one much more rewarding than the Four Fours. Firstly it allows for powers, which adds another operation to practice. Second, it requires a bit of working systematically in order to be sure you have the smallest number of 1’s possible. Thirdly it doesn’t create as much of a need to extend the operations allowed, because it’s quite interesting enough all by itself. Finally, it also has a nice extension problem which is to find out if there is a number whose digits are all 1, and can be calculated using the same number of 1’s as appear in it.

Here is a photo of Year 11 students working on this problem. When I suggested that perhaps they need to be more systematic, they decided to take a divide-and-conquer approach. 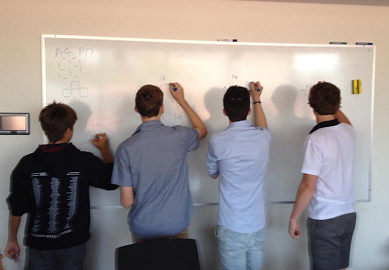 Pi on the Floor

The Pi on the Floor problem goes like this:

I made this one up on the spot at the One Hundred Factorial session on Pi Day (American Pi day anyway). I wanted something fourfoursesque that used the number pi, and it occurred to me that the floor function would allow us to create integers pretty easily. Little was I prepared for the interest it would generate or the clever maths that would be created by the students in response. I learned so very much about how the floor function worked, and about how close some multiples of pi were to various whole numbers.

Here is a photo of some people working on the problem. (I have blurred out the solutions though, so you can do them yourself!) 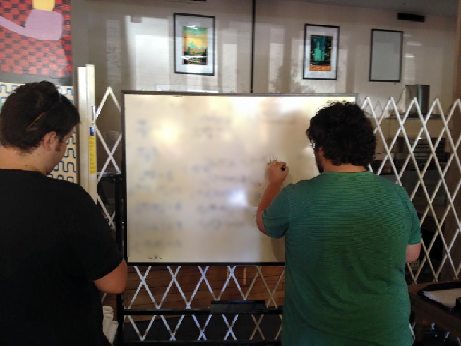 The i’s Have It 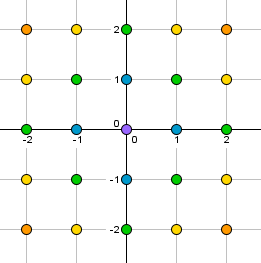 We did this one at One Hundred Factorial in January 2016 and it was a most interesting problem. You had to really use the fact that i is an ordinary number that does actually do ordinary operations, especially to produce the real number results. Amie Albrecht suggested the extension problem of not being allowed to use the – sign, which forces you to use the fundamental property of i that i*i = -1 and very much changes the answer! 0 in particular is much harder to make without using minus!

So there you have it. Four alternatives to the Four Fours. I like them all better than the Four Fours, mostly because none of them imply that you can do something that’s impossible, and some actually challenge you to find the most efficient solution. Plus, they all make you think about functions or numbers or properties of number that you don’t think about that often. I and various friends, students and strangers have had a lot of fun thinking about them, and have learned a lot. Try them out yourself and tell me how they go!

This entry was posted in One Hundred Factorial, Thoughts about maths thinking and tagged practice, puzzles. Bookmark the permalink.