One of my favourite puzzles is the Twelve Matchsticks puzzle. It goes like this:

Twelve matchsticks can be laid on the table to produce a variety of shapes. If the length of a matchstick is 1 unit, then the area of each shape can be found in square units. For example, these shapes have areas 6, 9 and 5 square units. 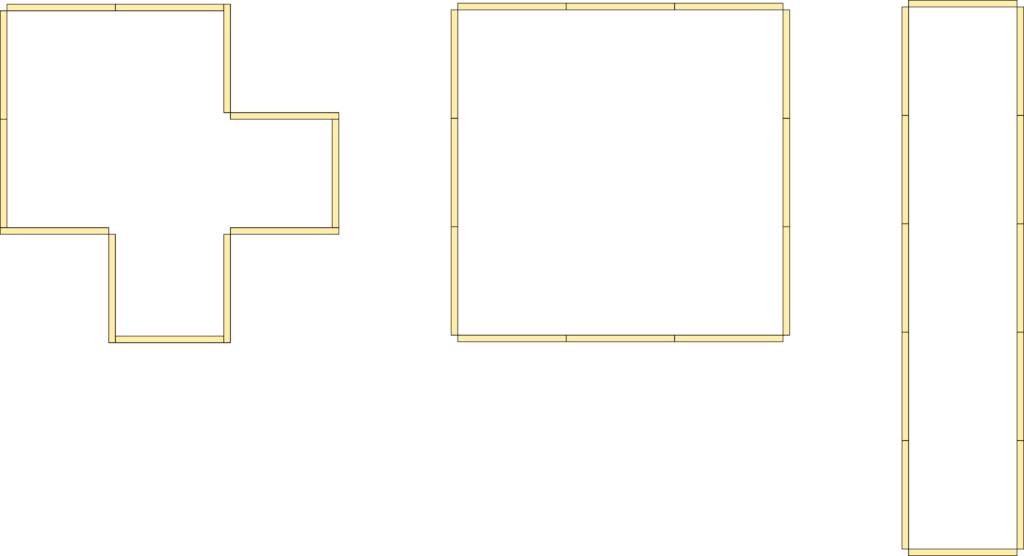 I will tell you soon why this is one of my favourite puzzles, but first I want to tell you where I first learned this puzzle.

Once upon a time, about ten years ago, I met a lecturer at my university who was designing a course called Puzzle-Based Learning. It was an interesting course, whose premise was that puzzles ought to provide a useful tool for teaching general problem-solving, since they are (ostensibly) context free, so that problem-solving skills are not confounded with simultaneously learning content. Anyway, when he was first telling me about the course, he shared with me the Twelve Matchsticks puzzle, because it was one of his favourite puzzles. The reason it was his favourite appeared to be because the solution used a particular piece of maths trivia.

And the puzzle has become one of my favourite too, but for very different reasons! Indeed, I strongly disagree with my colleague’s reasons for liking the puzzle.

The first thing I disagree with is the use of the word “the” in “the solution”, because this puzzle has many solutions! Yet my colleague presented it to me as if it had just one.

The second thing I disagree with is that using a specific piece of trivia makes it likeable. I do recognise that knowing more stuff makes you a better problem-solver in general for real-world problems, but even so I always feel cheated when solving a puzzle requires one very specific piece of information and you either know it or you don’t. It seems to me it sends a message that you can’t succeed without knowing all the random trivia in the world, when of course it is perfectly possible to come up with acceptable solutions to all sorts of problems with a bit of thinking and investigating.

The main reason I love the Twelve Matchsticks puzzle is because it does have many solutions, and because this fact means that different people can have success coming up with their own way of doing it, and feel successful. Not only that, if I have several different people solving it in different ways, I can ask people to explain their different solutions and there is a wonderful opportunity for mathematical reasoning.

Another reason I like it is that people almost always come up with “cheat” solutions where there are two separate shapes or shapes with matchsticks on the inside. I always commend people on their creative thinking, but I also ask if they reckon it’s possible to do it with just one shape, where all the matchsticks are on the edge, which doesn’t cross itself. I get to talk about which sorts of solutions are more or less satisfying.

The final reason is that most of the approaches use a lovely general problem-solving technique, which is to create a wrong answer that only satisfies part of the constraints, and try to modify it until it’s a proper solution. This is a very useful idea that can be helpful in many situations. As opposed to “find a random piece of trivia in the puzzle-writer’s head”.

Which brings me to the second part of the title of this blog post. Let me take a moment to describe two different experiences of being helped to solve this puzzle.

When I was first shown this puzzle, my colleague thought there was only one solution, and his help was to push me towards it. He asked “Is the number 12 familiar to you? What numbers add up to 12? Is there a specific shape that you have seen before with these numbers as its edges?” He was trying to get me closer and closer to the picture that was in his head and was asking me questions that filled in what he saw as the blanks in my head. And there were also some moments where he just told me things because he couldn’t wait long enough for me to get there.

I did get to his solution in the end, and I felt rather flat. I was very polite and listened to his excitement about how it used the piece of trivia, but inside I was thinking it was just another random thing to never come back to again. It wasn’t until much later that I decided to try again, wondering if I could solve the problem without that specific piece of trivia.

When I help people with the Twelve Matchsticks puzzle, this second one is the approach I take. I ask them to try making shapes with the matchsticks to see what areas they can make. I ask what all their shapes have in common other than having 12 matchsticks. I notice when they’ve made a square with lines inside it and wonder how they came up with that. Can they do something similar but not put the extra ones in the middle?  In short, I use what they are already doing to give them something new to think about. I encourage them to do what they are doing but more so, rather than what I would do.

The approach where you have an idea in your head of how it should be done and you try to get the student to fill in the blanks is called funnelling. When you are funnelling, your questions are directing them in the direction you are thinking, and you will get them there whether they understand or not. Often your questions are asking for yes-or-no or one-word answers to a structure in your head which you refuse to reveal to the student in advance, so from their perspective there is no rhyme or reason to the questions you are asking.

The approach where you riff off what the student is thinking and help them notice things that are already there is called focussing. When you are focussing, you are helping the student focus on what’s relevant, and focus on what information they might need to find out, and focus on their own progress, but you are willing to see where it might go.

Interestingly, when you are in a focussing mindset as a teacher, you often don’t mind just telling students relevant information every so often (such as a bit of maths trivia), because there are times it seems perfectly natural to the student that you need such a thing based on what is happening at that moment.

(There are several places you can read more about focussing versus funnelling questions. This blog post from Mark Chubb is a good start: https://buildingmathematicians.wordpress.com/2016/11/03/questioning-the-pattern-of-our-questions/ )

From my experience with the Twelve Matchsticks, it’s actually a rather unpleasant experience as a student to be funnelled by a teacher. You don’t know what the teacher is getting at, and often you feel like there is a key piece of information they are withholding from you, and when it comes, he punchline often feels rather flat. Being focussed by a teacher feels different. The things the teacher says are more obviously relevant because they are related to something you yourself did or said, or something that is already right there in front of you. You don’t have to try to imagine what’s in the teacher’s head.

So the last reason the Twelve Matchsticks is one of my favourite puzzles is that it reminds me to use focussing questions rather than funnelling questions with my own students, and I think my students and I have a better experience of problem-solving because of it.

This entry was posted in Being a good teacher and tagged problem-solving, puzzles, teaching methods. Bookmark the permalink.