The line at infinity

Why I’m doing this

I foolishly said this on Twitter about a month ago:

@DavidKButlerUoA @MathguyArt on the line at infinity? Tell me about those!

At the time I declared this was a bit of a can of worms and I promised to write something and post it later. Well, here it is. But it might take a few blog posts to untangle it. In this post, I’m going to talk about how we can construct the line at infinity.

What do parallel lines have in common?

What can you say about points and lines? Well, if I had a single line, I could certainly locate a lot of points on the line. And if I started with a single point, there would be a lot of lines through that point. 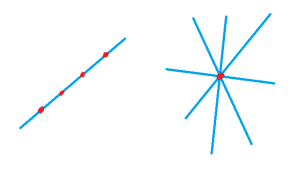 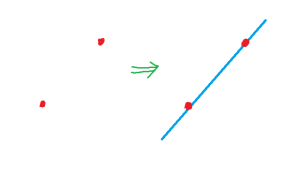 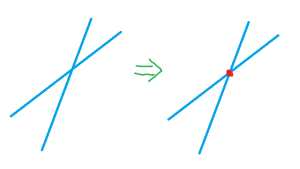 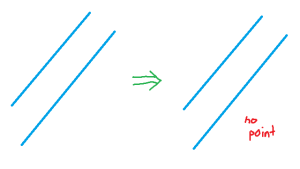 But it’s not as if parallel lines have nothing in common. If you draw two lines parallel to each other, then they are obviously very very similar. Some might say they are the most similar kinds of lines. I find that rather interesting: somehow, by not meeting, two parallel lines are inextricably linked. What is it that they have in common?

Well, one thing they have in common is their slope. Two parallel lines have the same slope. If we’re thinking algebraically, you can rearrange their equations so that they have equations like y=mx+c and y=mx+d, for the same m but different c and d. Of course if they’re vertical, then the equations can’t be rearranged to look like this, but we can still say they have the same “slope” of “no slope”.

A new kind of point

Now that we have this idea that two lines must share something, they are a lot more like points.

This has a kind of pleasant symmetry about it. It would have even more symmetry if it was

Only it is this! If I pick a point and a slope, there is a unique line through that point with that slope! (You may say that two slopes don’t share a line, and yes I realise this, but I’ll get back to it I promise.)

So it seems that slopes and points are the same kinds of thing, at least with respect to how they interact with lines. I think this is rather cool. It’s a bit philosophical, but often cool things are. The really nice bit of philosophy is this: if points and slopes are so similar, why don’t I declare that a slope is a new kind of point? Then I can just say

Can I just do that? Can I call something by a new name? It’s not as if the slopes really are points — I can’t see them or point to them (excuse the pun). But that sort of thing has never stopped us mathematicians before (think of the number 0). Plus, perhaps there is a way to see them after all…

If you look at a pair of parallel lines from above, then it actually does look like they ought to meet somewhere. Look out to the horizon and there they seem to meet. Of course if you walk towards it, that intersection point just keeps getting further away. However far you go towards it, it’s still just as far away. Of course, that’s because the point isn’t really there, it just looks like it is. But it does look like it’s there, and you feel like if only you went far enough, you’d see it. 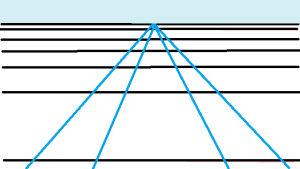 This is the extra bit of philosophy we need to legitimise calling our slopes points. It feels like two parallel lines actually do meet, but they meet infinitely far away. Philosophically, we know the two parallel lines do share something that acts like a point acts — it’s their slope. So what we do is we declare that our slope-points we made earlier are called “points at infinity”.

It’s not just matching with our visual instincts either. If you were going to add a new point to a line, it would have to go somewhere, but there’s no space over here to put that extra point — our lines are already full. We’re going to have to add our extra point at the end of our line — that is, out there at infinity.

So now we have two kinds of points: we have our original common-or-garden points that we can see. And we have our new points at infinity that we can’t see. These points at infinity aren’t really there in the world, but they are really there in our minds — they are the slopes of the lines, and we know for sure that two parallel lines do indeed share a slope. We know that slopes are like points in the way they interact with lines, and so it’s ok to call them points. But we can’t see slopes either, so in a way it is only fitting to call them “points we can’t see”.

You might be thinking that surely I could have looked in the opposite direction and drawn my line that way. Well, yes I could. And that’s where the analogy needs a bit of tweaking. Remember that these points at infinity are not really points that live in a real place: they are slopes that don’t live anywhere but in our minds. It looks like if we want them to live in the real world, we’re going to need them to be both in front of us and behind us. Needs must.

The line at infinity 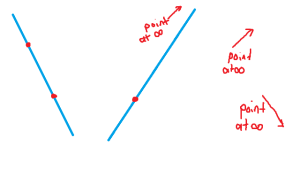 But what about two points at infinity? That’s two slopes, and we know there’s no lines with two slopes. Well that’s ok, we’ll just collect all the slopes together to make one new line. Since this line is made up entirely of points at infinity, we’ll call it the line at infinity.

From now on, we will start talking about the points at infinity as if they were really real points, that really were really at infinity. If we try hard we can remember that they’re really just slopes, but we don’t have to do that to make the maths work. Our imagination will tie in fine with how the maths works, because we’ve carefully made it do so. We’ve had to bend our imagination a little to make the concept of a really real line at infinity fit with our words and pictures, but that’s ok, we can always check back with the slopes if we need to make sure. Plus, really cool maths often requires a change of perspective.

(The next post in the series is all about coordinates, and the one after that is about conics.)

This entry was posted in Isn't maths cool? and tagged geometry, maths. Bookmark the permalink.