Return to the iplane: A complex line

It’s been four years since I came up with the idea of iplanes as a way to organise the complex points on a graph, and in the intervening time I have thought about them on and off. For some reason right now I am thinking about them a lot, and I thought I would write down some of what I am thinking. It will take several blog posts, and they are likely to be some weeks apart, so bear with me.

A recap of the iplane idea 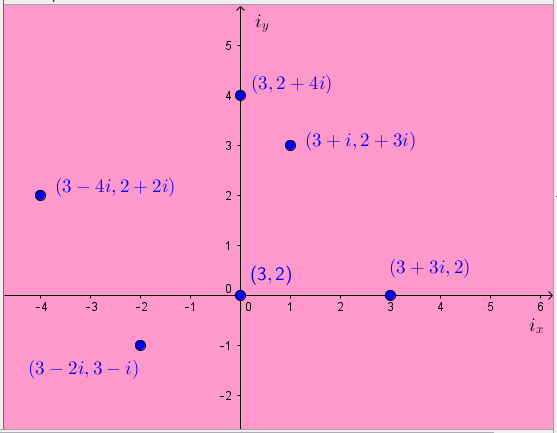 I imagine the iplanes as transparent sheets attached at each real point, that are usually rolled up like an umbrella, but can be flattened out to sit on top of the ordinary real plane when you need to. And yes I imagine them as transparent red or pink, because that’s the colour cellophane I had in my original model. 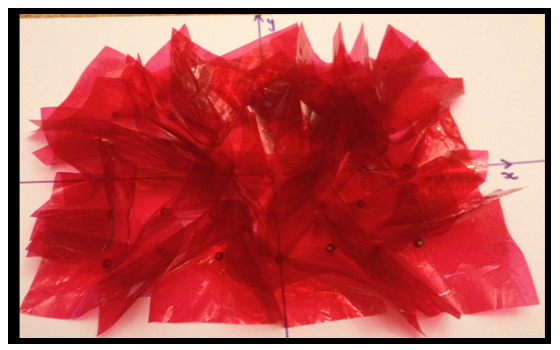 The points on a complex line

Last time, I did a thorough investigation into the points on a complex line, stepping through the points on a real line, a line with real slope but non-real intercept, and a line with non-real slope. But I’ve always been a little unsatisfied with my treatment of it. I really wanted to have a unified approach to all three types of lines, since they are all just complex lines. I was sure there was a way of dealing with them that could allow me to just take a complex line with a standard equation and know what it should look like.

Well there is a way and I’ve done it. I am very proud of it, and not least of the things making me proud is a GeoGebra page that allows you to choose any complex line and then see what points are on the line in the iplane attached to a moving point, but with all kinds of complex lines together in one GeoGebra tool, rather than separate like last time. But we’ll get to that soon…

Consider a line L with equation (a+αi)x+(b+βi)y=(c+γi), for real numbers a, α, b, β, c, γ with a, α, b, β not all zero. This is the most general form of a complex line. Given a real point (p,q), I am going to find all the complex points in the iplane attached at (p,q) that are on the line L. I will suppose that the point (p+si,q+ti) is on L and try to find the imaginary parts of its coordinates (s and t).

Since (p+si, q+ti) is on the line L, it satisfies the equation, and so:

Equating real and imaginary parts, I get two equations:

Which I can rearrange into:

Whatever points (p+si,q+ti) inside the iplane at (p,q) are on the line L, they must have their s and t’s satisfy these two equations.

And those two equations appear again in the equations inside the iplane at (p,q).  The constant term in Equation 1 is ap+bq-c, which you would get if you substituted the point (p,q) into the real part of the original equation. The constant term in Equation 2 is γ-αp-βq, which you would get if you substituted (p,q) into the imaginary part of the original equation. If (p,q) satisfies both of these equations, then Equation 1 and 2 both have constant 0, and so have s=0, t=0 as a solution. But if s=0 and t=0, that means the point in the iplane is (p,q), which is a real point! That is, there is one real point on the complex line L with equation (a+αi)x+(b+βi)y=(c+γi), and this one real point is the intersection of the two real lines with equations ax+by=c  and αx+βy=γ. I think that is so cool!

Of course, I have glossed over a few technical details. What if the two lines with equations αs+βt=ap+bq-c and as+bt=γ-αp-βq are parallel? Then there would be no intersection and so no points of the line L at all in this iplane. When would this happen? This would happen when the coefficients α and β were the same multiple of a and b, so α=ka and β=kb for some k. And then the original equation for L would have been

So the line L can be rewritten to have real coefficients for x and y, which means it has real slope! So a line with real slope will have many iplanes with no points of the line at all. Which ones will have actual points? Well, two parallel lines will share points (indeed all their points) if they are actually the same line after all. This would happen when as well as α=ka and β=kb, we also have the constant terms being related in the same way:

This is the equation of a straight line parallel to the one with equation ax+by=c, which is the real part of the original line L’s equation! So either an iplane will have no points of L at all, or it will have a whole line of points of L, whenever the point (p,q) is on a specific line parallel to the real part of the original line.

If ap+bq-c is not zero, then Equation 1 has no solutions and there will be no points of the original line L in this iplane; if ap+bq-c is zero, then Equation 1 is 0=0, which is always true, and so any point satisfying Equation 2 is a point in this iplane. But wait, the points satisfying ap+bq-c=0 are exactly the points on the real line with equation ax+by=c. And since α and β are zero the original equation was ax+by=c+γi anyway. So this matches with what we found before: a line of real slope has points only in the iplanes attached to a real line parallel to the real part of the original line. In this case, not just parallel but equal to the real part of the original line!

The same thing happens when both a and b are zero. Then the two equations inside the iplane become

And now there are no points of L in the iplane unless αp+βq=γ , which is still the equation of a real line. Indeed, the original equation is (αi)x+(βi)y=c+γi, which is the same as αx+βy=-ci+γ, so the line with equation αp+βq=γ is actually the real part of one version of the original line’s equation.

So after all this, we find that the complex line L with equation (a+αi)x+(b+βi)y=(c+γi) behaves like this in the iplanes:

You can investigate all of this in this GeoGebra applet, which allows you to choose coefficients for the equation of L and move the point (p,q) to see the point(s) of L in the iplane attached there. 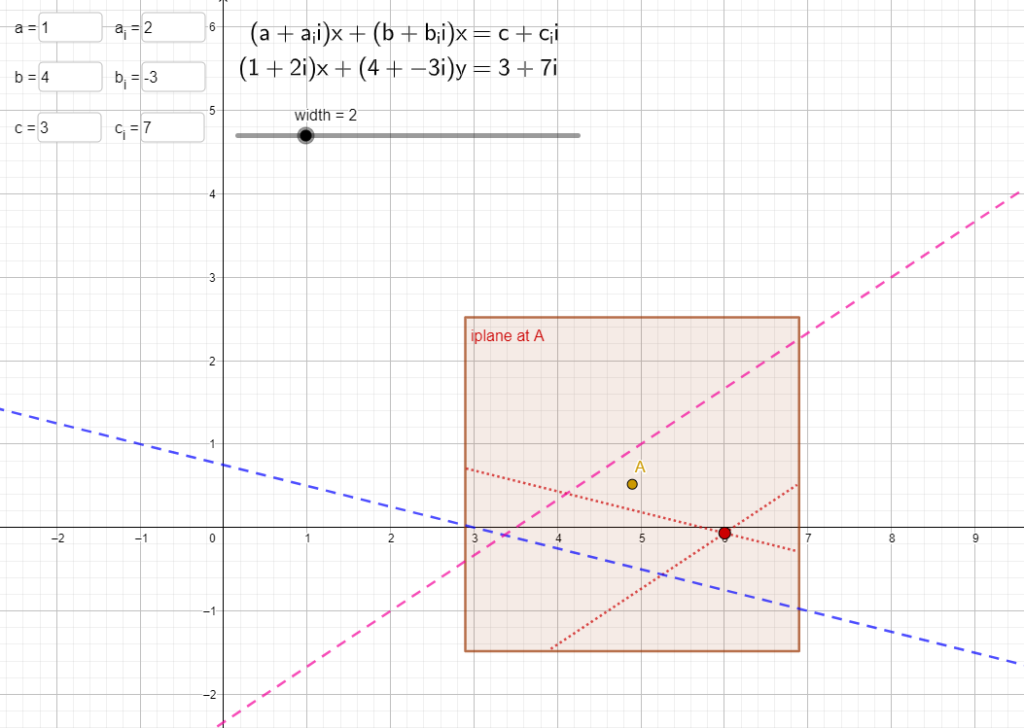 Thanks for being here for my mathematical scribblings. I worry that it might not make any more sense than the old version, but I feel a deeper sense of satisfaction having tried it both ways (and having one GeoGebra applet with all the types of lines at once).